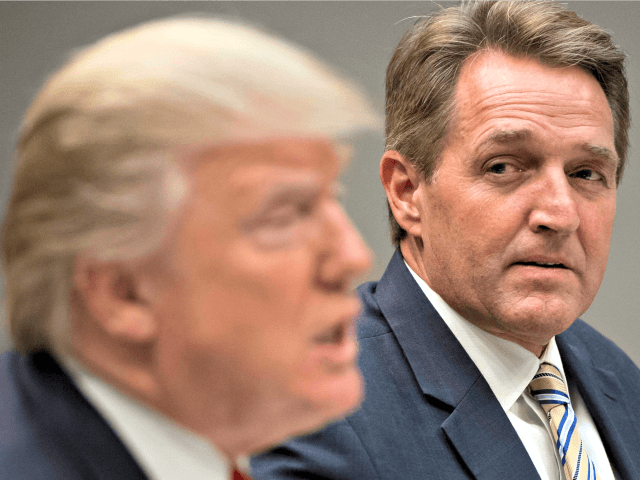 Sen. Jeff Flake (R-AZ) — who is leaving office after his term — says President Donald Trump is wrong to “emphasize the criminals” among a 7,000-strong migrant caravan headed to the U.S.-Mexico border to overwhelm the country’s asylum and immigration system.

During an interview with CNN’s Jake Tapper, Flake criticized Trump for saying that there are “criminals and unknown Middle Easterners” that are “mixed in” with the migrant caravan of mostly Central American nationals who are economic migrants.

TAPPER: Do you have any ideas what the president is talking about when he says there are unknown Middle Easterners mixed in with the caravan.

FLAKE: That’s long been pretty much a canard and a fear tactic. Obviously with a border that large, you’re going to have people come across that are coming from other countries. And some obviously with nefarious motives. But to make it sound like this is in order to put people in here who would do us harm and to emphasize the criminals among them, it’s just … I just don’t think it’s the right way to approach it. [Emphasis added]

Republican Sen. Jeff Flake on Trump’s tweet claiming “unknown Middle Easterners” are “mixed in” with the migrant caravan: “No, that’s long been pretty much a canard and a fear tactic… These… are people who are either fleeing violence or looking for a better life” #CITIZENCNN pic.twitter.com/PagwvTmJ1C

Flake also admits that the migrant caravan is made up mostly of foreign nationals fleeing crime and looking for jobs, neither of which are grounds for asylum in the U.S.

“These, for the most part overwhelmingly, are people who are either fleeing violence or looking for a better life. And we have programs for some of them — asylum programs — and others, obviously we can’t accept everyone,” Flake said. “We have to have border security, but it has to be done in a thoughtful manner.”