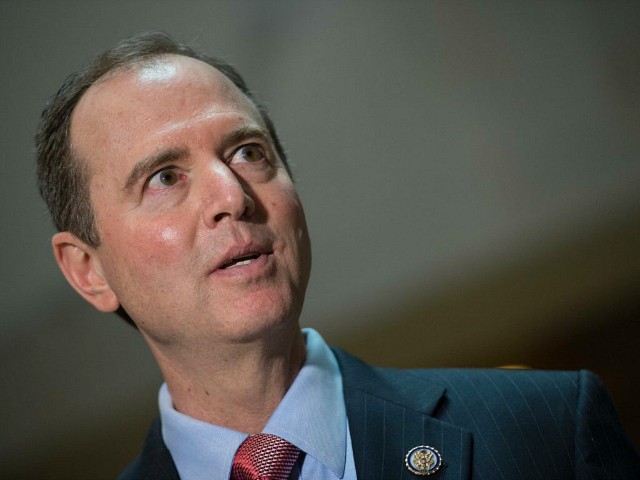 Rep. Adam Schiff (D-CA) on Sunday called for a new investigation of President Donald Trump and his family amid accusations from Democrats that “financial motives” keep the president from holding the Saudi government accountable for the recent disappearance and suspected death of Jamal Khashoggi, a Saudi man who contributed columns to the Washington Post.

“I do think we need, in the Intelligence Committee, do — do a deep dive, a probe in terms of Saudi Arabia in terms of the Saudi efforts, of the war in Yemen, the civilian casualties there in terms of this murder. But we also have to determine whether financial motives are motivating the president and the first family. This is the very problem with the president not releasing his tax returns,” said Schiff on ABC News’s This Week.

“So I do think we ought to demand answers of the administration,” he added.

Rep. Peter King (R-NY), who also appeared on This Week, said Schiff was wrong to inject partisanship into the issue:

I think it’s wrong to inject partisanship in this right now. Nobody was more supportive of the Saudis than President Obama. The large arms deals under President Obama. He fought us tooth and nail, attacked the Congress when we allowed 9/11 families to sue the Saudis. He went out of his way to shield the Saudis. To be making these type of allegations against the president — if you want to do it three or four months from now, do it.

Schiff would become the chairman of the House Intelligence Committee if the Democrats take back the House in November, and he would have the power to call hearings, launch investigations, and issue subpoenas to members of Trump’s family.

Over the summer, Axios published a list of more than 100 items that Democrats plan to investigate if they take the House. He would likely relaunch the House Intelligence Committee’s investigation into whether the Trump campaign colluded with Russia. The committee this year closed its investigation, finding that there was no collusion.

“Lawyers close to the White House tell me the Trump administration is nowhere near prepared for the investigatory onslaught that awaits them, and they consider it among the greatest threats to his presidency,” Axios’s Jonathan Swan wrote.

Schiff also tried to characterize Trump as friendly to dictators, a Democrat line of attack since before the 2016 election.

“The folks that were involved in this murder are not going to be speaking out. So we’re never going to have absolute certainty. It’s for that reason I think that the president is going to accept the crown prince’s denials, much as he’s accepted Putin’s denials and Kim’s denials,” he said.

He also pinned some blame on Trump for the killing of Khashoggi.

“I think part of why we are where we are is that we have essentially delivered a message through the Trump family that it’s carte blanche for the Saudi family. They can do what they want where they want and the U.S. will never stand up to them,” he said.