Remember the media-stoked controversy over Donald Trump declaring that he was a “nationalist”?  Sample headline in USA Today: “‘I am a nationalist’: Trump’s embrace of controversial label sparks uproar.”  That uproar might seem hard to recall now, because it was all the way back on … October 23.

It was the day before the October 24 uproar about the steroid-crazed male stripper who sent unexploded—and apparently unexplodable—bombs to various Democratic offices.  And it was also before the horrendous tragedy in Pittsburgh on October 27, when an anti-Semitic psycho shot and killed 11 worshipers at a synagogue.

It might seem challenging to put a larger political spin on the lonely acts of kooks and evildoers, but the establishment media is up to the challenge—especially if it involves dinging Donald Trump.  Indeed, the media’s latest storyline is that Trump’s “violent rhetoric” is to blame. Here, for example, is a headline from The Guardian: “Donald Trump’s rhetoric has stoked antisemitism and hatred, experts warn.”  (You know that the media really means to make a point when they cite “experts.”)

In the face of such a determined media onslaught, the thoughtful words of the Israeli ambassador to the United States, Ron Dermer, went almost unheard. Speaking on the scene of the Pittsburgh massacre, Dermer told CNN, “I have never seen a stronger statement” than the one that President Trump issued in the wake of the shooting.  This only makes sense: After all, Trump’s daughter Ivanka is Jewish, along with his son-in-law, and three of this grandchildren. But since he was so “off message,” you can bet that CNN won’t be inviting him back anytime soon.

Still, even if the “nationalism” controversy is two controversies ago, it’s not going to go away. It’ll linger as a media talking point, and, who knows, perhaps it will  become one more article of impeachment next year if the Democrats win back the U.S. House of Representatives on November 6.

So it’s worth pausing over this word, “nationalism,” to see why it puts the left in such a tizzy.

We can start with CNN’s tremendously Trump-hating “reporter,” Jim Acosta, who declared on October 23 that the President was using “nationalism” as a way of “dog whistling” to “white nationalists.”  And that night, Acosta’s CNN colleague, Don Lemon, was quick to agree; as he said, the word is “loaded with nativist and racial undertones.”

Interestingly, that same day, October 23, NBC’s Peter Alexander used almost the exact same language as Lemon; Alexander accused Trump of using a word redolent with “undertones that are not just racial but xenophobic.” (You know, the similarity in their words is almost enough to make Virgil think that Lemon and Alexander were reading from the same talking points!)

Then there was The San Diego Union-Tribune, which printed a cartoon showing Trump getting a Sieg Heil salute. 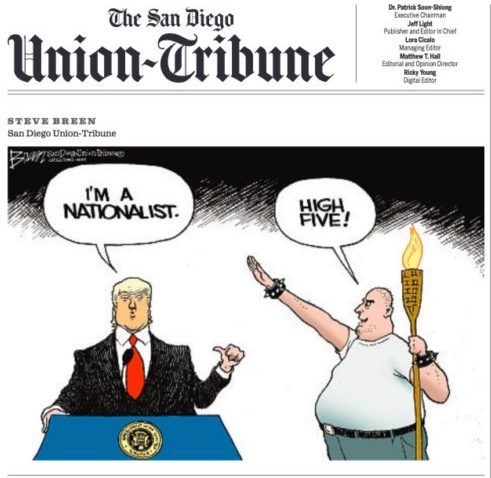 As for establishment media-style Deep Analysis of the nationalism question, we might turn to Jennifer Rubin, The Washington Post’s comically anti-conservative “conservative,” who opined of three possible explanations for Trump’s use of the word.  The first explanation, she wrote, “has us believe that Trump is an empty-headed dolt who has no idea what he is saying.” The second, she added: “Trump supposedly is smart enough to know what ‘nationalist’ means, but he is falsely associating himself with the term.”  And third, “He knows exactly what it means, his base knows exactly what he means and he knows the strongest bond with followers is xenophobia. Immigration and bogus issues such as the caravan are his go-to topics when he needs to juice up his followers.”  Okay, got that?  If we are to believe Rubin, we have a choice: Trump is a dope, a liar, or a Nazi-ish true believer. And let’s remember: Rubin is the Post’s idea of a conservative; the Post’s liberals were even rougher.

For his part, Trump has been saying nationalistic-sounding things for years, even decades. For instance, way back on September 2, 1987, he took out full-page ads in three newspapers to criticize foreign economic relationships that were unfair to the U.S.  (If that’s not consistency, what is?)

And of course, since then, Trump has made the same nationalist points a million times; as he said during the 2016 presidential campaign, “Americanism, not globalism, will be our credo.” And what was the shorthand for his campaign?  Oh yeah, Make America Great Again.

So if Trump actually used the word “nationalism” for the first time on October 23, it wasn’t as if his nationalist, patriotic, pro-American sentiments had somehow been hidden. What’s really weird is that the media likes to pretend that all of a sudden “nationalism” is a big deal.

Come to think of it, what’s wrong with “nationalism,” anyway?  The word wasn’t in common use in the 18th century, when George Washington was alive, and yet the patriotism of the Father of our Country was on constant display. In fact, he even found occasion to celebrate America’s victory in the Revolutionary War—with a toast to the new nation. As he proclaimed in his General Orders of April 18, 1783, “An extra ration of liquor to be issued to every man tomorrow, to drink Perpetual Peace, Independence & Happiness to the United States of America.” 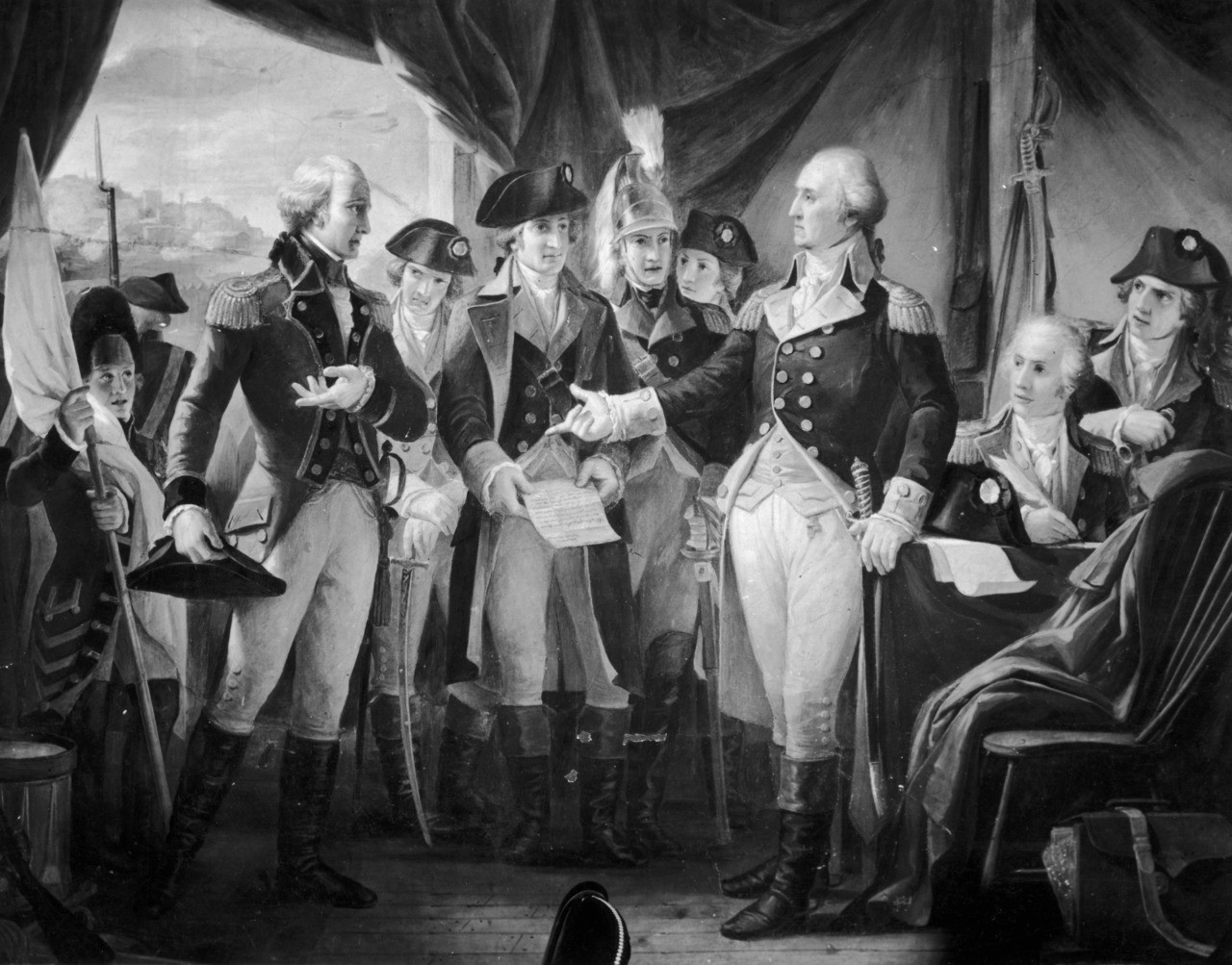 In the 19th century, Abraham Lincoln never hesitated to link himself to the core articles of Americanism: “Let us readopt the Declaration of Independence, and with it the practices and policy which harmonize with it,” he said in 1856.

Five years later, in his first Inaugural Address, Lincoln launched into an ode to this country that still brings a tear to the eye: “We are not enemies, but friends. We must not be enemies. Though passion may have strained, it must not break our bonds of affection. The mystic chords of memory, stretching from every battlefield and patriot grave to every living heart and hearthstone all over this broad land, will yet swell the chorus of the Union, when again touched, as surely they will be, by the better angels of our nature.” 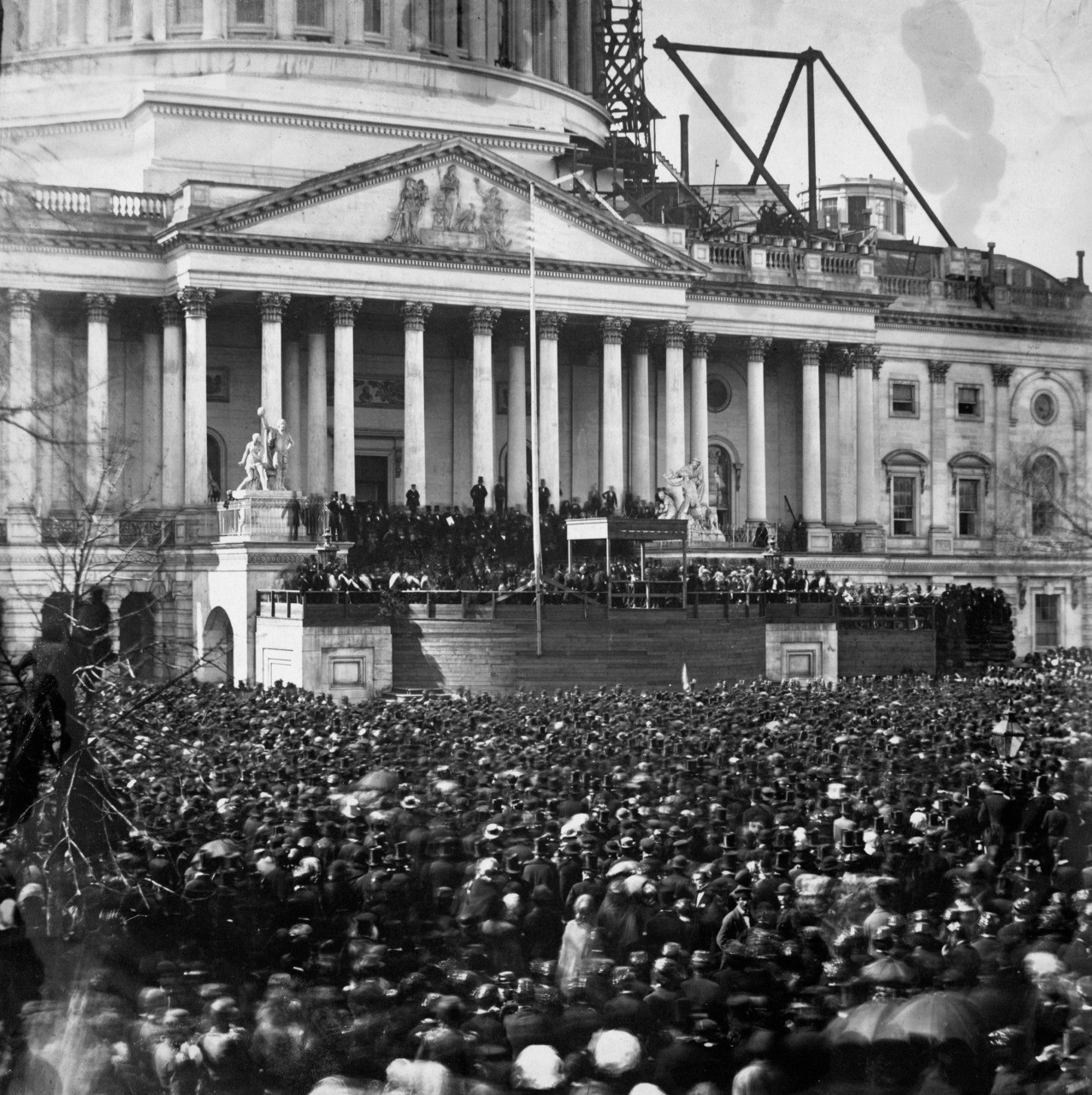 Abraham Lincoln’s first inauguration, at the still unfinished U.S. Capitol in Washington, D.C., on March 4, 1861. Lincoln is standing under the wood canopy. This is believed to be the first U.S. inauguration ever photographed. (Wikimedia Commons)

By the 20th century, “nationalism” was in common usage. And so in his famous speech in Osawatomie, Kansas, on August 31, 1910, former president Theodore Roosevelt had to stipulate that he was talking about a “New Nationalism.” As he put it, “We work in a spirit of broad and far-reaching nationalism where we work for what concerns our people as a whole. We are all Americans. Our common interests are as broad as the continent. I speak to you here in Kansas exactly as I would speak in New York or Georgia, for the most vital problems are those which affect us all alike.” 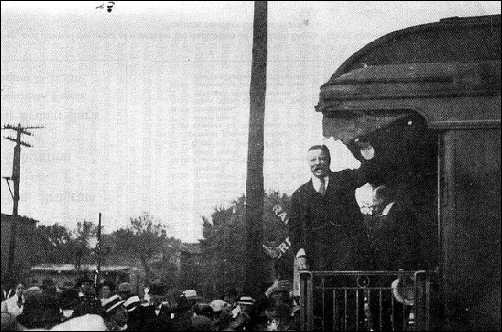 TR’s words, we might add, gave shape to the robust national ethos that enabled America to win World Wars I and II, as well as the Cold War.

Later in the 20th century, TR’s cousin, Franklin D. Roosevelt, was also an unabashed nationalist. As Harvard professor Samuel Beer wrote in 1979: “Franklin Roosevelt’s first inaugural address on March 4, 1933, could have been entitled ‘the new nationalism’ as fittingly as any utterance of his cousin Theodore, who first gave currency to the expression. None of the main points in that famous speech can be summarized without reference to the nation. No other thematic term faintly rivals it in emphasis.” 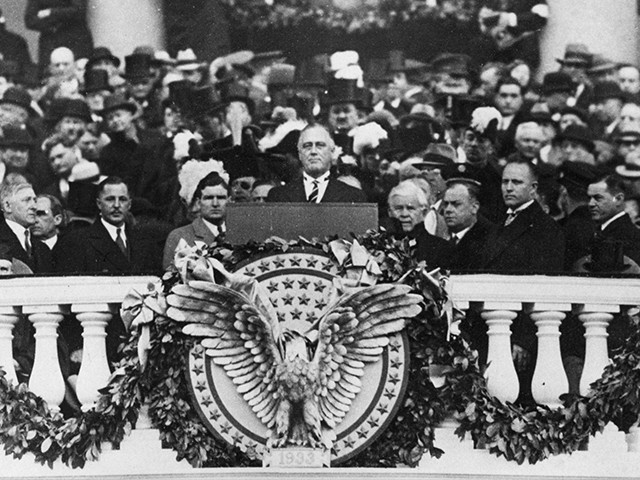 As with TR, FDR actively proclaimed that Americans would pull together as a nation, in hard times and good, in pursuit of national goals.

And then there’s Ronald Reagan. In an election eve address on November 3, 1980, the Gipper told a national TV audience that American visitors to our civic shrines in Washington, D.C., “do not come as white or black, red or yellow; they are not Jews or Christians; conservatives or liberals; or Democrats or Republicans. They are Americans awed by what has gone before, proud of what for them is still a shining city on a hill.”

The next day, Reagan won the presidency in a landslide. 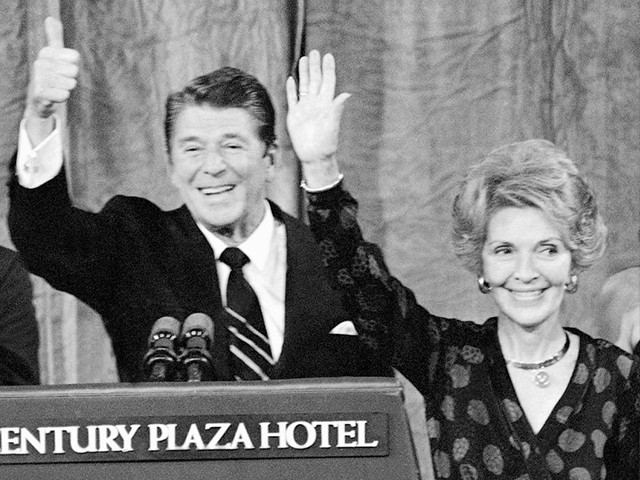 Ronald Reagan and his wife, Nancy, wave to supporters on election night, November 4, 1980, after his landslide victory. (AP Photo)

So we can see: Nationalism and patriotism have been fully a part of our national conversation for more than two centuries. And if pride in the nation seemed a little out of fashion in the Obama years, well, those years are now behind us.  Today we have Trump, and nationalism is back. And yet the establishment media, which doesn’t like this president, also doesn’t like that word.

Yet the rest of us can observe that nationalism is strong because it is, well, natural.  It grows out of people’s natural desire to be in families, teams, and communities. Thus the nation-state is simply family, team, and community writ large.

We might also observe that the nation-state must be writ large enough such that the nation, and its people, can survive in a dangerous world. The U.S. never would have defeated the Kaiser, or Hitler, or the Soviet Union, if we had not been united and strong. Similarly, today, we won’t be able to defeat Jihadism or Globalism if we aren’t united. 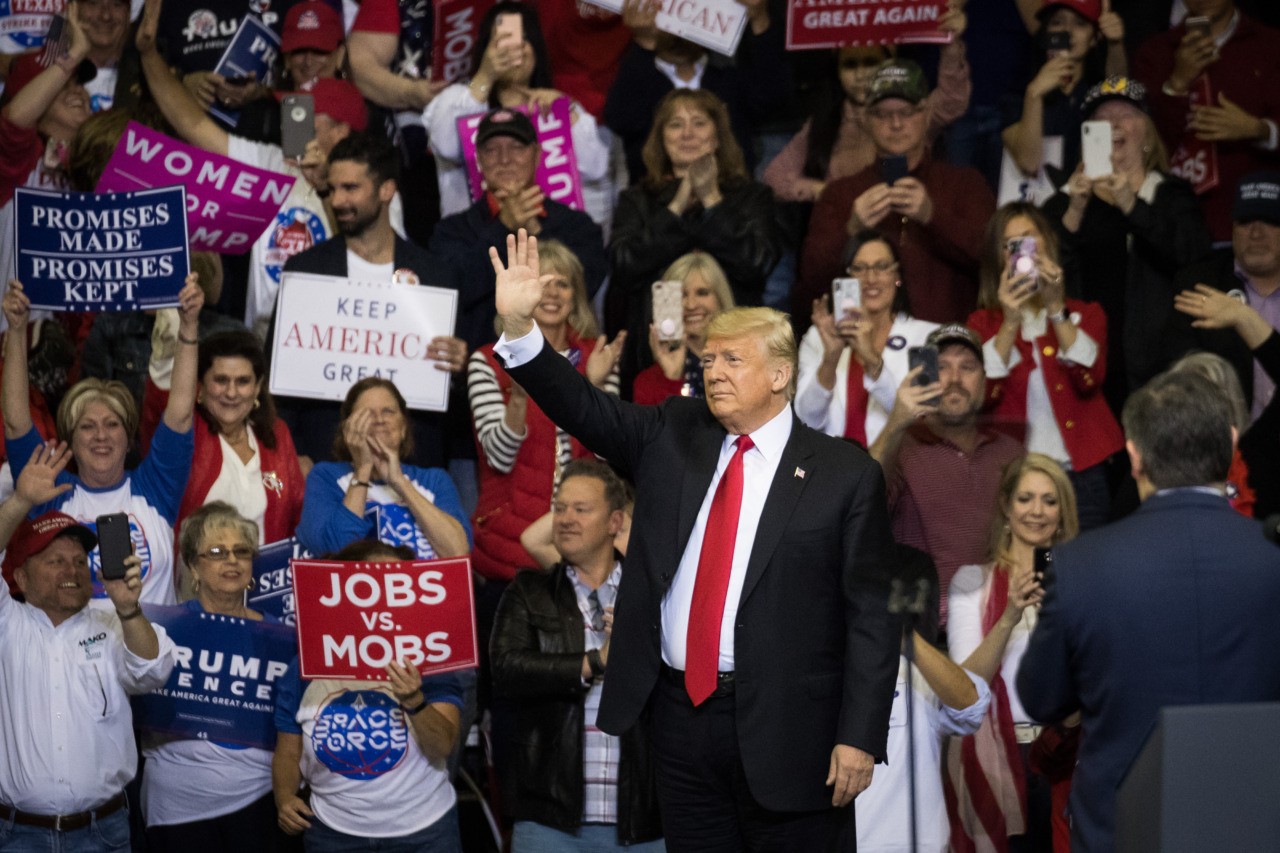 President Trump at the rally in Houston, Texas, on October 22, 2018, where he declared, “I am a nationalist.” (Loren Elliott/Getty Images)

So hurrah for Trump for saying the word “nationalism.”  Even more, hurrah for the nation, for being so strong.  And so perhaps we should all obey General Washington’s order, and “drink Perpetual Peace, Independence & Happiness to the United States of America.”

Yes, a celebration of American nationalism will annoy the media, and there’s some fun in that.  But the main reason we celebrate Americanism is because we love our fellow Americans—even reporters.

And we want no harm to come to any of them.