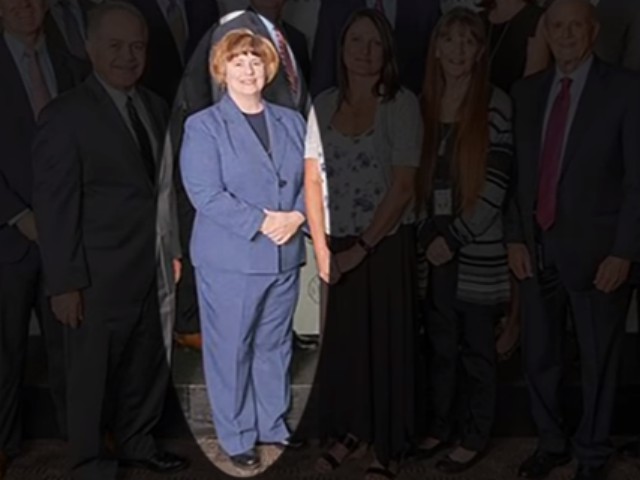 Mitchell was hired onto the Judiciary Committee’s roster of staff attorneys for this hearing, taking leave from her office in Phoenix, where she serves as Maricopa County’s Deputy County Attorney and division chief the County Attorney’s Office’s Special Victims Division, which handles sex crimes and domestic violence.

Mitchell has served for 25 years as a prosecutor in the nation’s fourth largest county, including 12 years at the head of the sex-crimes bureau.

Grassley’s majority staff had already announced that, despite the protests of Ford’s legal team, who evidently would have preferred the appearance of the all-male Republican senators questioning a lone woman, they would appoint a female attorney with specific experience handling sex abuse issues. Her identity, however, was kept private until Tuesday night.

In a statement announcing Mitchell as the previously unnamed prosecutor, Grassley wrote:

“As I have said, I’m committed to providing a forum to both Dr. Ford and Judge Kavanaugh on Thursday that is safe, comfortable and dignified. The majority members have followed the bipartisan recommendation to hire as staff counsel for the committee an experienced career sex-crimes prosecutor to question the witnesses at Thursday’s hearing. The goal is to de-politicize the process and get to the truth, instead of grandstanding and giving senators an opportunity to launch their presidential campaigns. I’m very appreciative that Rachel Mitchell has stepped forward to serve in this important and serious role. Ms. Mitchell has been recognized in the legal community for her experience and objectivity.

Some commentators on the political left immediately criticized the pick, trying to tie Mitchell, who is an unelected civil servant, to the controversially convicted — and now pardoned — Maricopa County Sheriff Joe Arpaio.

The Washington Post’s Never Trump blogger Jennifer Rubin, who is regularly identified as a “conservative” in media outlets despite distancing herself from the term, insulted Mitchell on Twitter shortly after the announcement, making this mistake:

Only this crowd of clueless old white guys wold pick someone from Sheriff Joe’s operation. I was saying no self-respecting lawyer would take the job of giving cover to GOP cowards. I was right.

Some of the attacks on Mitchell’s suitability focused on controversies over inadequate Sheriff’s Office sex-crime investigation under Arpaio last decade. Not only did Mitchell not work at the Sheriff’s Office, she, as the Washington Post’s Tuesday report notes was, according to her predecessor Cindi Nannetti, “one of the prosecutors tasked with finding out why hundreds of sex crimes were unresolved or not adequately investigated by the Maricopa County Sheriff’s Office.”

Nannetti also told the Post that Mitchell was “one of the finest prosecutors in the country.”

Defense attorney Tracey Westerhausen, a self-identified Democrat who represented “more than 30” defendants Mitchell prosecuted, told the Post, “Part of the reason we’re very good friends, she is a very nuanced and wise prosecutor. She doesn’t pigeonhole defendants. In my experience, she is a very pointed questioner of adverse witnesses. But she is also very fair.”