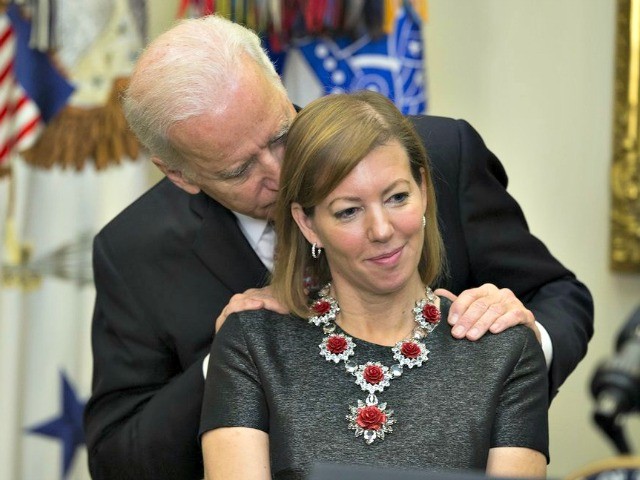 President Donald Trump and former Vice President Joe Biden both campaigned in Nevada on Saturday, but it was clear that Trump bested the former vice president in crowd size.

“By the way, Joe Biden is in Las Vegas,” Trump said, during a rally in Elko, Nevada. “Sleepy Joe Biden, we call him ‘One Percent Joe.’”

Trump noted that despite repeatedly running for president, Biden never got more than one percent support in the polls.

When Trump asked supporters which nickname they preferred, one woman in the crowd shouted “Creepy Joe!”

“She said ‘Creepy Joe,’” Trump said, pointing her out in the crowd. “No, I would never do that, I would never insult him like that.” The “Creepy Joe Biden” nickname grew among Trump supporters, based off of pictures of the former Vice President’s habitual holding and touching women and girls during political events.

Trump said that Biden only had 193 people at his campaign rally in Las Vegas.

“We love Elko, but in all fairness, it’s easier to draw a crowd in Las Vegas,” Trump said.

Trump claimed there were 6-7,000 people who couldn’t get into his rally in Elko.

He said Republicans were going to win big in the 2018 midterm elections.

“The Blue Wave is rapidly being shattered,” Trump said. “Not looking like a blue wave.”

We’re at the Culinary Union HQ waiting for former Vice President Joe Biden to show up for an early voting rally and to campaign for Nevada Democrats. pic.twitter.com/6Id0hclcKQ

Long lines and big crowds at the #Trump rally in Elko. pic.twitter.com/O8ONxzd1BG

MASSIVE CROWD at Trump Rally in in Elko, NV.

Gotta give @realDonaldTrump credit. He is a campaigning machine! #MAGA pic.twitter.com/r23FnSoEoq