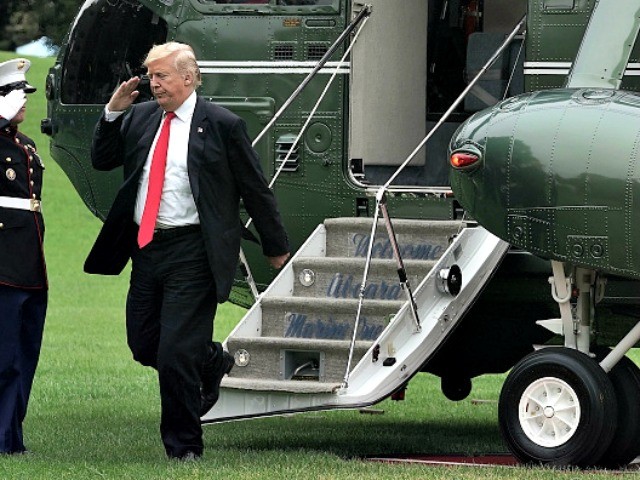 The president stopped just before boarding Marine One on his way to rally supporters in West Virginia for the Republican challenger to Sen. Joe Manchin, candidate Patrick Morrissey.

“I think it’s going very well. The FBI as you know is all over talking to everybody,” Trump told the reporters. “I would expect it will turn out very well.”

“There has never been anybody looked at like Judge Kavanaugh,” said Trump. He remarked on the good job that the FBI is doing. “They have free reign, they can do whatever they have to do, whatever it is that they do. They’ll be doing things we have never even thought of,” Trump went on. “And hopefully at the conclusion, everything will be fine.”

President Trump reaffirmed his belief that Kavanaugh has not done anything wrong. “I think he’s great. I don’t think there’s ever been any person who’s been under scrutiny like he has,” he said. “I think it’s been a very tough process. He’s a good man. He’s a great judge. A great judge. Highly respected for many many years. At the top of the list. I hope that everything works great.”

“I really believe when the public looks at these situations that have taken place over the last three or four days, and what the Democrats are doing and more importantly how they are acting. So terrible. So dishonest,” said Trump. He pointed to Democrats “Keeping papers and documents and not releasing them until after the hearings are over.”

Trump said of Sen. Jeff Flake forcing the FBI investigation, “he’s fine. Actually, this could be a blessing in disguise. Having the FBI go out and do a thorough investigation, whether its three days or seven days, I think it’s going to be less than a week.”

President Trump said the FBI investigation “will be a blessing in disguise. It will be a good thing.”

Responding still to reporter questions, he said, “I don’t need a backup plan. I think he’s going to be fine.”

Trump said “the FBI has a chance to reveal a lot of different things.” He expressed hope that the investigation will uncover who leaked Kavanaugh accuser Dr. Christine Blasey Ford’s papers. “Was it Sen. [Dianne] Feinstein? Certainly, her body language was not exactly very good when they asked her that question.” He indicated that he believes a Democrat “leaked the papers.”