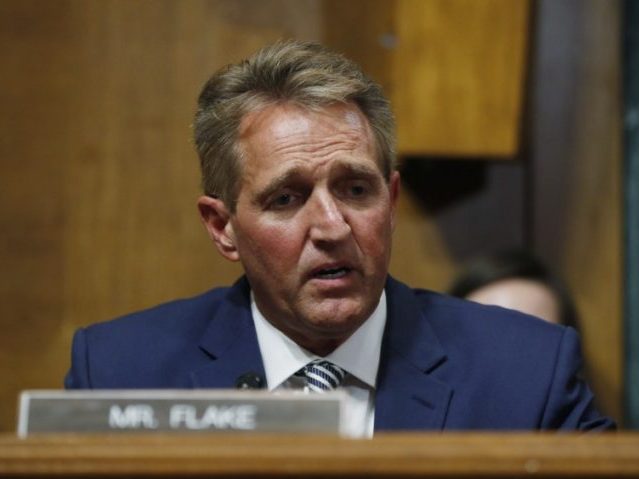 Any member of Congress is capable at any time of doing harm to his or her political party or even the country itself.

Casting a vote undermining a carefully crafted piece of legislation after committing to colleagues not to do so. Making a public statement clearly at odds with universally accepted norms. Engaging in conduct that is unlawful, unethical, or both. Refusing to apologize when such an act clearly is necessary and appropriate. These are but a few actions in which a senator or member of Congress can engage that can hurt their party colleagues or, in extreme cases, the country.

Rarely, however, can someone in as important a position as a sitting United States senator do such great harm as that by Arizona’s Sen. Jeff Flake in telling his Republican Party, and indeed the entire country, that he would refuse to vote to confirm Judge Brett Kavanaugh on the floor of the Senate — even after voting to have the nomination reported favorably by the Judiciary Committee on which he serves — unless the FBI conducts another investigation; this one focused on the allegations leveled against Kavanaugh after the week-long hearings conducted by the committee earlier this month.

Many Republicans in Congress and the administration, while critical of Flake’s last-minute but not altogether unexpected shenanigans, downplay the potential cost of subjecting Kavanaugh and his family to yet another week of the Hell to which they already have been subject. The silver lining on which these Republicans focus seems to be their conclusion that all the witnesses who already have come out in support of the judge’s side of the story, will be consistent and tell the FBI the exact same thing in the course of this new investigation. Unfortunately, in the real world, what someone says one day does not always jibe precisely with what they might choose to say on another day to a different person. Even if that discrepancy is not made with ill intent, and notwithstanding that an interviewee’s recollection or retelling of an event may not be significant, rest assured that the Left will seize on any such instance as yet more evidence of Kavanaugh’s guilt and as reason to further undermine his credibility.

Even more problematic is the possibility that — despite the judge’s obvious excellent, if not phenomenal memory and impressive attention to detail — he personally says something at odds with his testimony already on the record or that he stated in an earlier interview with the FBI or any other federal official. Can you envision the firestorm of renewed calls by senators and House members for not only his defeat in the Senate vote, but as grounds for his later impeachment? You can hear the wails already: “A Supreme Court justice who has perjured himself and lied under oath. This cannot stand!”

Flake’s truly idiotic demand that his Senate vote can be had only if yet more investigation be done of what surely is the most investigated judicial nominee in our country’s history, will come back to haunt the nation long after this vote is taken. And the political damage this lone senator has wrought will reverberate in the fast-approaching mid-term election, regardless of whether Judge Kavanaugh is confirmed by the Senate, and definitely not to the advantage of the GOP.

In demanding precisely what every Democrat on the Judiciary Committee had sought, but which the Republicans had — amazingly — held the line against, Flake gave the other party credibility and cover they would not otherwise have. Now, thanks to Flake, every Democratic candidate will be able to claim that their incessant calls for further investigation of the allegations against Judge Kavanaugh were “bipartisan.” And technically, such a claim would be truthful.

As anyone who possesses even a rudimentary knowledge of contemporary politics knows to a certainty, regardless of what the coming investigation of Kavanaugh’s accusers yields, the Democrats will continue their harangue against the GOP, the President, and the Judge himself. If the good Sen. Flake thought he might be purchasing for himself some goodwill from his colleagues on the other side of the aisle, or perhaps lining up left-leaning clients for his post-senatorial career, he is sadly mistaken. The Left will shun him now that he has given them what they craved. The GOP will remember him as a Benedict Arnold. And he will fade into the Arizona sunset as a modern-day Icarus blinded by his own misguided yearning to be admired.