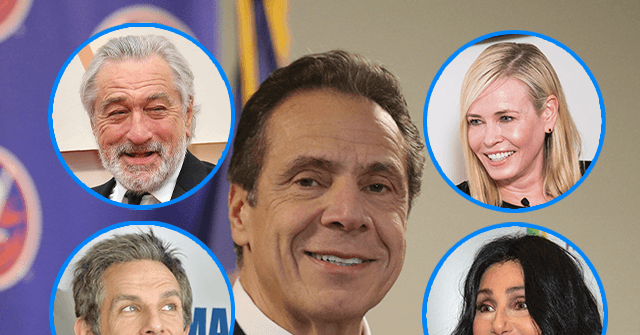 Their love for New York’s governor was so strong that a new sexual orientation had to be invented — “Cuomosexual.” Now as Andrew Cuomo fights for his political life amid nursing home and sexual harassment scandals, Hollywood’s burning desire for the Democratic politician has grown cold and desolate.

Celebrities including Chelsea Handler, Ellen DeGeneres, and Cher helped lead the Cuomosexual pride parade last year. Most Cuomosexual stars have yet to publicly acknowledge the governor’s nursing home coverup, in which a top aide revealed that the administration withheld crucial data on nursing home deaths.

They have also largely ignored the seven accusations of sexual misconduct against him, including one alleged groping incident that has been referred to Albany police. The mounting scandals have led to bi-partisan calls for Cuomo to resign, which the governor has so far refused.

In what became a Cuomo love-in, a chorus of celebrities joined in to sing Cuomo’s praises last November as he accepted his International Emmy Award for his daily coronavirus press conferences. Stars including Robert De Niro, Billy Joel, Ben Stiller, Rosie Perez, Billy Crystal, and filmmaker Spike Lee recorded video messages extolling the governor for setting “an example to the rest of the world.”

Chelsea Handler has been largely silent on social media about Cuomo since the scandals broke. On Friday she tweeted “I had a crush on Andrew Cuomo. Vs. I no longer have a crush on Andrew Cuomo.” As Hollywood’s most enthusiastic Cuomosexual, she penned a letter in Vogue magazine last year in which she expressed a desire to become his first lady.

In the Vogue letter, titled “Dear Andrew Cuomo, I Want To Be Your First Lady,” Handler heaped praise on the New York governor for “being a leader at a time when so many of us were desperately looking for one.” She also posted a video in which she declared her lust for Cuomo.

“Getting ready for my boyfriend to come on TV,” she enthused. “I’m pretty hot for Andrew Cuomo, not going to lie about that… I mean, could Andrew Cuomo be any hotter?”

What’s been the nicest thing about self-quarantining? Getting to know @NYGovCuomo and all his goodness. I decided to put my thoughts on paper. You can read it on @voguemagazine. pic.twitter.com/c3gqta9UIh

Ellen DeGeneres declared her love for Cuomo in an April episode of her show. “Can I say that I am a Cuomosexual?” she said. “We know that that’s going around, that people are saying they’re Cuomosexuals?”

The governor replied: “Yeah, I think that’s a good thing.”

Actress Jada Pinkett Smith revealed that she had a crush on Cuomo in an episode of her Facebook Watch series. Red Table Talk in April.

I really hope @NYGovCuomo sees this awesome @RandyRainbow video from one great New Yorker to another (@chelseahandler you got competish) https://t.co/nms03dutck

Comedy Central’s The Daily Show host Trevor Noah also came out as a Cuomosexual during an appearance on Ellen in April last year.

But unlike other Hollywood elites, Noah has since revised his opinion on Cuomo, saying on an episode of The Daily Show this month that “right now things are looking pretty bad” for the governor.

“I’ll tell you, all those people who praised Cuomo so highly last year, those people really don’t look so smart now,” Noah said, jokingly referring to himself.