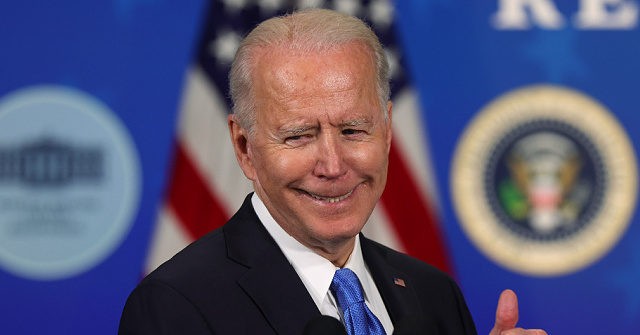 There were key words and phrases President Joe Biden failed to use during Thursday’s primetime address marking the one-year anniversary of the Chinese coronavirus pandemic, including “China,” — the virus’s place of origin — and “Operation Warp Speed” — the partnership prompted by former President Trump’s administration that sped up the development and distribution of vaccines to fight the illness.

Biden appeared to place blame on former President Trump nearly immediately, telling the American people, “A year ago, we were hit with a virus that was met with silence and spread unchecked, denials for days, weeks, then months.” Biden notably failed to mention the travel ban on China Trump instituted weeks before officials formally declared a pandemic. That was not the only subject Biden failed to mention.

Throughout the address, Biden spoke about the impact the virus has had on America and the American economy, as well as vaccine development, even announcing that all adults will be eligible to receive a vaccine by no later than May 1. Noticeably absent from his remarks on vaccines, however, was the phrase “Operation Warp Speed,” the massive undertaking of the Trump administration with the goal of speeding up vaccine development and distribution.

“Every adult will be eligible to get their shot. And to do this, we’re going to go from a million shots a day that I promised in December before I was sworn in, to maintaining, beating our current pace of two million shots a day, outpacing the rest of the world,” Biden said, failing to mention the previous administration’s key role.

Biden also failed to mention the words “Chinese,” “China,” or “Wuhan” — the virus’s place of origin, ignoring the role China played in the global spread of the illness. He did, however, mention crimes committed against Asian Americans, whom he said had been “attacked, harassed, blamed, and scapegoated.”

“At this very moment, so many of them, our fellow Americans, they’re on the front lines of this pandemic trying to save lives, and still, still, they are forced to live in fear for their lives, just walking down streets in America. It’s wrong, it’s un-American, and it must stop,” he said.

While Biden attempted to offer a glimmer of hope in his address, he struck a demonstratively cautionary tone, warning Americans they need to continue to practice social distancing, wear masks, and put “trust and faith” in the government. Ultimately, if Americans fail to stick to the rules, Biden warned officials may have to “reinstate restrictions to get back on track.”

“But to get there we can’t let our guard down. This fight is far from over,” he said, expressing hope Americans will be able to gather with a small group of people by Independence Day but warning conditions could take a turn for the worse, prompting further government action.

Biden also did not mention “lockdowns” during his speech, opting to use the phrases “collective suffering” and “collective sacrifice.” Additionally, the president did not mention the number of migrants traveling through Mexico to the southern border, nor the risk they pose in bringing additional cases of the virus into the U.S.