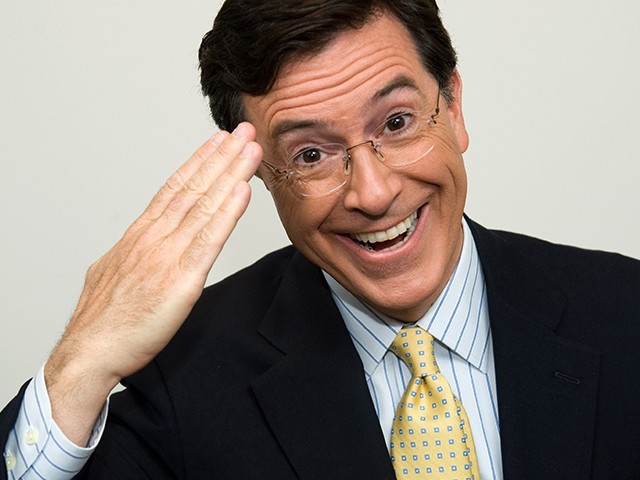 CBS late-night host Stephen Colbert joked that U.S. troops who are going to be stationed at the U.S.-Mexico border to prevent a caravan of migrants from entering the U.S. will need to lie their “ass off” when their kids ask them what they did under President Donald Trump.

“I’m sure you all joined the army to do what’s right and defend your country. Well, this is not it,” a faux commander said in a bit played at the opening of Thursday’s The Late Show with Stephen Colbert.

“30 years from now when you’re sitting by your fireside with your grandson on your knee and he asks, ‘What did you do when Donald Trump was president?’ Take a deep breath, look into his eyes, and lie your ass off!”

During his opening monologue, Colbert said President Trump is “more afraid” of CNN host Jake Tapper than he is of North Korean dictator Kim Jong-un Thursday.

“Those engaged in the political arena must stop treating political opponents as being morally defective,” President Trump said.

The host continued, “Throughout his speech, Trump kept reminding the audience how civil he was being,” playing a clip of Trump saying, “The Democrats are for higher taxes, more regulation, and more top down government control. And, by the way, do you see how nice I’m behaving tonight? This is like–have you ever seen this?”

“Yes. I used to see presidents do it all the time before we elected a guy who’s more afraid of Jake Tapper than Kim Jong-un,” the Colbert said.

Colbert’s show, like many late-night shows, have become dependent on Trump hate for laughs.

Just this week, the former Comedy Central funnyman invoked the Ku Klux Klan while mocking Trump for calling himself a “nationalist.”

“You know why you’re not supposed to use that word? Because it’s the second half of ‘white nationalist.’ Chopping off the first word doesn’t change what it means in our minds! Oh look, I’m a Klux Klan. I have no idea which one! Don’t judge me! There are all kinds of Klux Klans!” he said.