This week, Tamaulipas state police found an abandoned delivery truck that held several large plastic containers filled with stolen fuel. According to the Tamaulipas government, the containers had approximately 2,500 liters of fuel believed stolen from nearby pipelines. 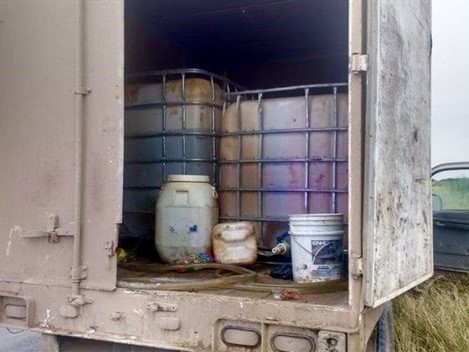 Authorities seized the vehicle and turned it over to federal prosecutors for further investigation. The Gulf Cartel in Tamaulipas continues to use the sale of stolen fuel as a way to diversify income. The fuel is stolen by tapping into the pipelines owned by Petroleos Mexicanos (Pemex). The fuel is then loaded into large containers or trailers and then sold onto a black market where local gas stations are often forced to pump it.

As Breitbart Texas reported, close to 24 U.S. companies were referenced in various lawsuits and other legal actions in connection with the purchase of fuel stolen by cartels in Mexico.

Editor’s Note: Breitbart Texas traveled to the Mexican States of Tamaulipas, Coahuila, and Nuevo León to recruit citizen journalists willing to risk their lives and expose the cartels silencing their communities.  The writers would face certain death at the hands of the various cartels that operate in those areas including the Gulf Cartel and Los Zetas if a pseudonym were not used. Breitbart Texas’ Cartel Chronicles are published in both English and in their original Spanish. This article was written by “J. A. Espinoza” from Tamaulipas