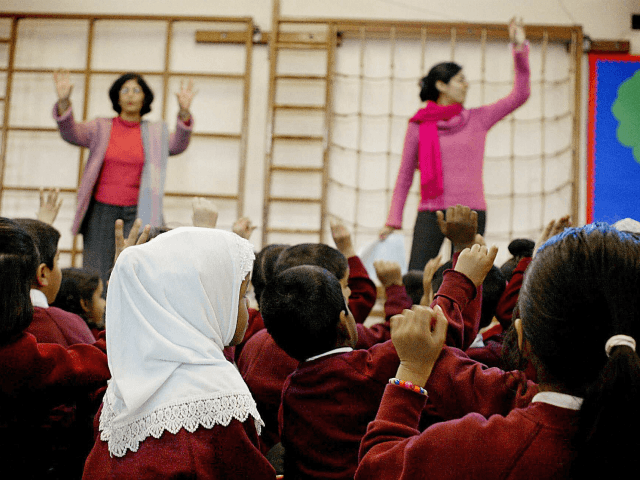 Sharia law council scholar Dr Amra Bone has defended Marks and Spencer selling hijabs for primary school pupils, saying that some nine-year-olds are “mature” enough to wear them, while Muslim MP Khalid Mahmood said the retailer should apologise and withdraw the item from sale because it “oppresses” girls.

“It is oppressive and what it does is sexualises girls as young as nine,” Labour’s Mr Mahmood said on ITV’s Good Morning Britain on Monday, pointing out that girls “even younger” were wearing the Islamic modesty garment, calling it “not acceptable”.

The quintessentially British retailer selling hijabs in sizes small enough for three-year-olds was brought to the fore last week by anti-extremism campaigner and LBC radio host Maajid Nawaz, who condemned the department store for “facilitating medievalism”.

Speaking to the radio host on Friday, the Labour MP for Birmingham Perry Bar, a multicultural area he acknowledges as having “strict communities”, called the hijab for young children “an issue of segregation” which leads to “‘extreming’ them into being ‘misogynised’ by men”.

“This is not about religion, this is not about piety, this is about enclosing the horizons before young girls moving forward,” Mr Mahmood said, adding that Marks and Spencer should “apologise” and remove the item from sale.

M&S have been criticised for selling hijab aimed at primary school age. pic.twitter.com/KTADGm1u5f

Dr Bone, the UK’s first female sharia judge who said she would be using her position to “champion[] women’s rights”, called “modesty a form of grace” on Monday and evoked consumer demand — Marks and Spencer “is a business, responding to the need of British Muslims” — to defend the selling of hijabs for children.

When challenged by host Susanna Reid, “Why does a nine-year-old girl need to cover her hair from a modesty point of view — she’s nine?” Dr Bone said girls “mature at different ages, and they should –”

To which cohost Piers Morgan interjected: “Nine-year-old girls aren’t mature, though, in any world.”

Dr Bone contended that in a “diverse society”, women need to be able to choose for themselves what to wear; in 2015, the sharia council scholar also said that Muslim men had the right to choose how many wives to have, regardless of British law, saying “the [British] government cannot — ask Muslims not to have more than one wife. People have a right to decide for themselves.”

Last year, it was revealed that girls as young as four were being forced to wear hijabs as part of their uniform — even at some schools funded by the British state.

“The debate is whether girls should be wearing it at such an early age, and that is why Marks and Spencer should not be selling it,” Mr Mahood said.

Rejecting Dr Bone’s assertion that the retailer was responding to consumer demand, he added: “This is about the oppression of young girls.”