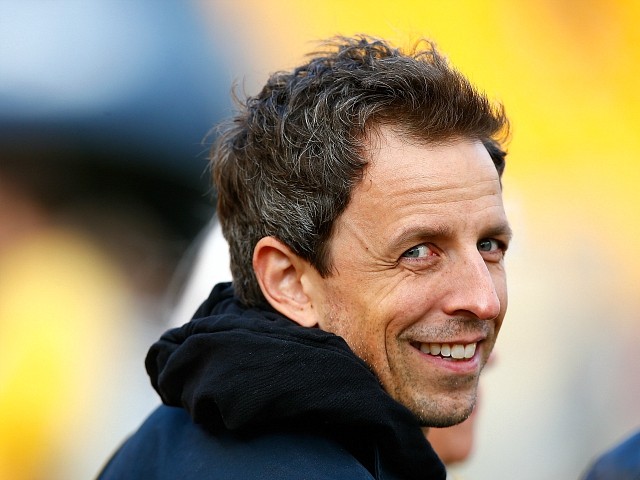 NBC’s Late-night funnyman Seth Meyers ripped into President Donald Trump and his Supreme Court nominee Brett Kavanaugh, describing the former as a “sexist dick” trying to turn the attention back onto himself.

Meyers showed the clip of Trump refusing to respond to a question from a female reporter about the ongoing controversy surrounding Kavanaugh’s nomination, claiming he “shot them down in super-demeaning and sexist ways.” He also played footage of Trump telling ABC News reporter Cecilia Vega: “That’s OK, I know you’re not thinking. You never do.”

“I mean, how much a sexist dick can you possibly be?” Meyers asked. “It’s almost like he saw someone else getting attention for acting like a maniac on TV, and thought, ‘I could top that.’”

Meyers also referred to a section of the press conference where Trump joked about what he would be like if he drank alcohol.

“What’s amazing about that joke is that inherent in the premise is Trump admitting that he already sucks,” Meyers responded. “That joke doesn’t work if everyone thinks Trump is a great president. He’s basically saying, ‘If you think I’m an asshole now, imagine if I had a few beers? I’d be a fucking nightmare.’”

Meyers is one of late-night comedy’s most fervent members of the anti-Trump resistance, every week offering new jokes about the state of the Trump presidency. Last week, he mocked Trump’s claim at the United Nations General Assembly that he had accomplished more than any other administration.

“That’s right, President Trump claimed that he has accomplished more than any other president in history, and world leaders in the audience laughed,” Meyers said. “Though technically they were still laughing from when he said, ‘Hello, I’m the president of the United States.’”