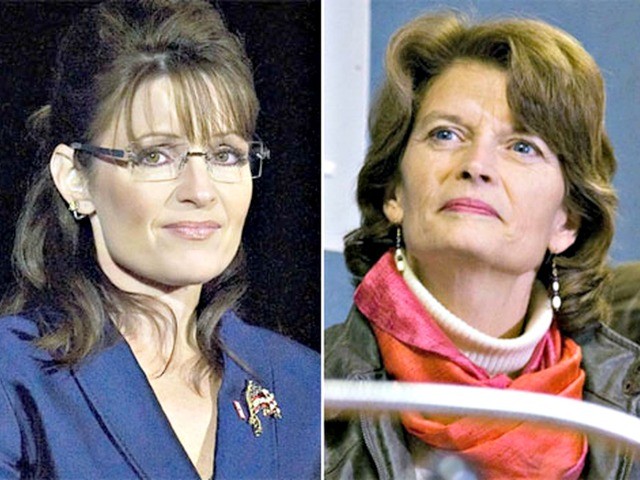 Former Republican Alaska Gov. Sarah Palin fired a warning shot at Sen. Lisa Murkowski (R-AK) after the senator voted against the cloture motion to end debate on Judge Brett Kavanaugh’s confirmation, hinting she may run to unseat the longtime lawmaker in 2022 or endorse a challenger.

In one of the most stunning upsets in Alaska political history, Palin defeated the senator’s father Frank Murkowski to become the state’s governor in 2006. Frank Murkowski, a former two-term senator who was elected governor of Alaska, served one term before Palin defeated him in the Republican gubernatorial primary.

Palin, who had been appointed to Alaska’s powerful oil and gas commission board by Frank Murkowski, won broad public support from Alaskans due to her record as a reformer and whistleblower who called out the corruption in the Murkowski administration for cronyism with the big oil companies, an action which led to the largest ethics fine in Alaska history. Frank Murkowski also faced criticism for nepotism when he appointed his daughter, Lisa Murkowski, to his vacant U.S. Senate seat.

Prior to voting against advancing Kavanaugh, Murkowski suggested that she will oppose President Donald Trump’s Supreme Court nominee this weekend. “I believe that Brett Kavanaugh is a good man. It just may be that in my view he’s not the right man for the court at this time,” Murkowski told reporters on Capitol Hill. She said she respected her colleagues’ support for Kavanaugh, adding, “I also think we’re at a place where we need to think about the credibility and integrity of our institutions.”

After remaining undecided on whether Kavanaugh’s nomination should move forward, Murkowski rendered her decision Friday in dramatic fashion. As the clerk read the names in alphabetical order, all eyes were on Murkowski. Senators stood up in their chairs and voted, some of them loudly.

But when it came to Murkowski, she stood up, paused, and whispered “no,” her voice barely audible. Then she took her seat, looking down with a stone-faced expression.

As the end of the vote neared, Maine Sen. Susan Collins, who sits next to Murkowski, leaned over and put her hand on the arm of Murkowski’s chair. The two huddled in deep conversation.

A spokeswoman for Murkowski could not immediately confirm that the senator will oppose Kavanaugh on the final vote expected Saturday, but indicated it appeared that way. Kavanaugh could still win confirmation if Murkowski is the only Republican to oppose him. Murkowski claimed she agonized over her vote, telling reporters she didn’t make up her mind until she walked into the Senate chamber. “This has truly been the most difficult evaluation of a decision that I’ve ever had to make, and I’ve made some interesting ones in my political career,” she said.