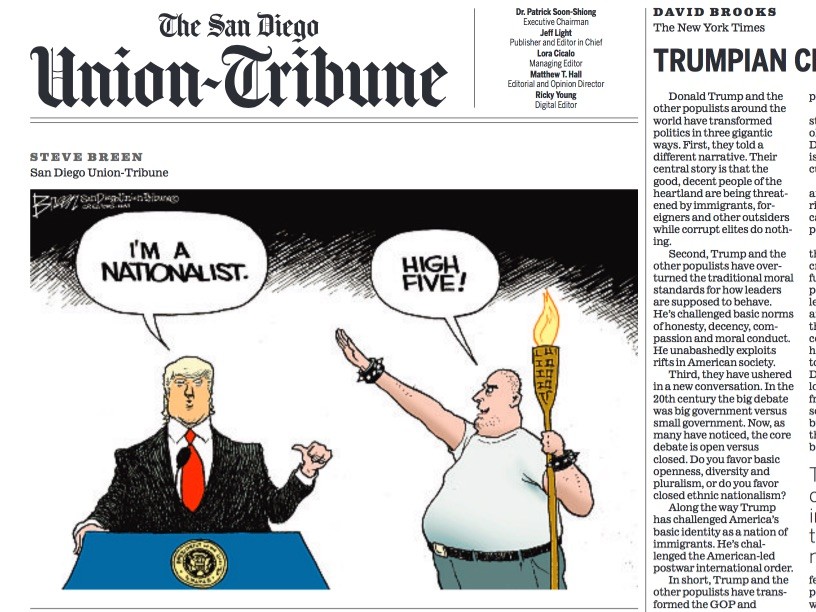 The San Diego Union-Tribune published a lead editorial cartoon Wednesday that portrays a skinhead giving the Nazi salute to President Donald Trump as he declares, “I’m a nationalist.”

The cartoon was drawn by nationally-syndicated cartoonist Steve Breen, and refers to remarks Trump made on Monday at a rally for Sen. Ted Cruz (R-TX) in Houston, Texas.

“A globalist is a person that wants the globe to do well, frankly, not caring about our country so much,” the president said. “You know what I am? I’m a nationalist. Okay? A nationalist. Use that word.”

On Tuesday, the president defended his remark to reporters in the Oval Office: “All I want our country is to be treated well, to be treated with respect. For many years, other countries that are allies of ours–so-called allies–they have not treated our country fairly. So in that sense, I am absolutely a nationalist, and I’m proud of it,” he said.

The president’s critics — including much of the mainstream media — have attempted to associate the president’s remarks with “white nationalism” or Nazism.

On Tuesday evening, CNN reported, “President Trump Doubles Down on Declaring Himself a Nationalist,” with video footage of last year’s torchlight procession by far-right groups in Charlottesville, Virginia.

(Trump condemned the neo-Nazis but argued that here were some ordinary protesters who opposed the removal of a statue of Confederate general Robert E. Lee — a fact later confirmed by the New York Times.)

The Union-Tribune was recently bought by billionaire Patrick Soon-Shiong, who declared war on “fake news”:

I believe that fake news is the cancer of our times and social media the vehicles for metastasis. Institutions like The Times and the Union-Tribune are more vital than ever. They must be bastions of editorial integrity and independence if they are to protect our democracy and provide an antidote to disinformation. We will continue our papers’ dedication to truth, integrity, journalistic independence, and storytelling that engages, informs, educates and inspires with care and compassion.

Nationalism is a common phenomenon around the world. In its simplest form, nationalism is a love of one’s own country above others. As scholar Yoram Hazony has written:

[I]t is a mistake to think of nationalism as an inherently regressive or destructive political force. In fact, nationalism was the engine that established modern political liberty, and it has been a spur to diversity among nations. It has been embraced by both liberals and conservatives, including revered figures such as Woodrow Wilson and Teddy Roosevelt, David Ben-Gurion and Mahatma Gandhi, Charles de Gaulle and Margaret Thatcher.

Critics of nationalism often contrast it to patriotism, which is a love of one’s country prior to any comparison with other countries.