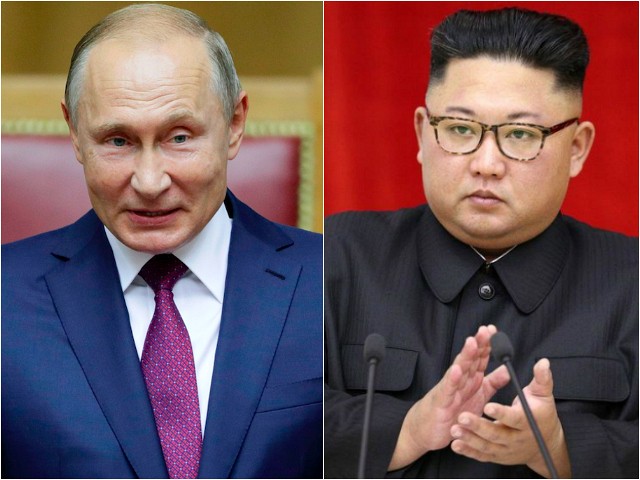 South Korean and Russian media on Monday teased a visit to Moscow by North Korean dictator Kim Jong-un to meet with President Vladimir Putin. No exact schedule for the meeting has surfaced, but there are signs it will occur in the very near future, probably before Kim’s second summit with U.S. President Donald Trump.

Vladimir Putin spokesman Dmitry Peskov confirmed on Monday the Russian president extended an invitation to Kim last month. Peskov’s statement was evidently prompted by U.S. Secretary of State Mike Pompeo’s visit to Pyongyang this weekend to pave the way for another Trump-Kim summit.

“Consultations on the possible date, place, and format of such a visit are underway,” Peskov said.

“A new order is being created on the Korean Peninsula,” Moon declared.

South Korea’s Yonhap News on Monday speculated that Kim’s visit to Moscow might happen surprisingly soon, based on rumors of a North Korean cargo plane flying into Vladivostok on Sunday. It is reportedly the same plane that transported Kim’s limousine and personal effects to Singapore for his meeting with President Trump.

Russian, Chinese, and North Korean officials are currently meeting in Moscow to discuss denuclearization and North Korea’s diplomatic opening to South Korea. Russia and China both signaled during the U.N. General Assembly that they expect sanctions against North Korea to be loosened as a reward for concessions purportedly made by the Kim regime.