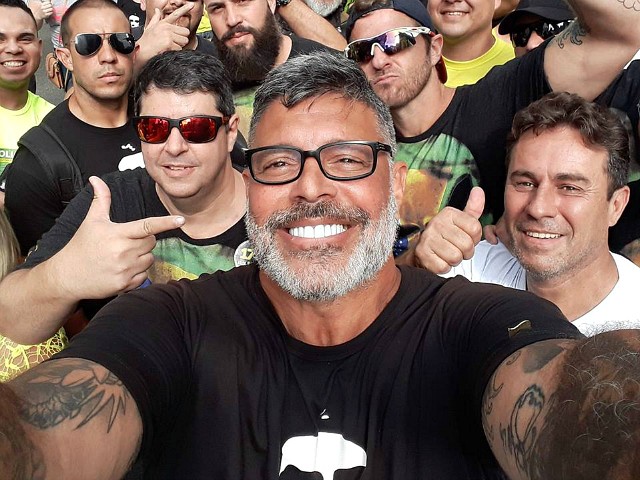 Alexandre Frota, 53, received 152,958 votes as a candidate for the right-wing Social Liberal Party (PSL), the same party as presidential frontrunner Jair Bolsonaro. Despite being having a name that implies social liberalism, the party holds conservative positions on everything from gay marriage to abortion, and its candidates champion individual gun rights and smaller government.

A former actor, he originally starred in Brazilian television series known as telenovelas as well as reality television programs, including the Brazilian version of Big Brother.

He later went on to direct and star in many pornographic films such as The Doll of the House and Frota: The Man of the Golden Gun, where he performed with pornographic actresses, including Chloe Jones and Bianca Soare.

This has also led to controversy. In 2015, he was accused of being a rape apologist after laughing at a woman who claimed she was sexually assaulted while unconscious. He also faced condemnation for describing sex with Brazilian dancer Rita Cadillac as like “having sex with my grandmother.”

Politically, he has long railed against “leftist indoctrination” and “gender ideology” in schools. In 2016, he publicly honored the coup of 1964 that saw the country fall under the military dictatorship for its legacy of keeping communism out of the country.

“52 years of that Brazil has been free of damned communism,” he wrote at the time. “Viva Brazil. Brazil will never be communist!”

The PSL’s presidential candidate Jair Bolsonaro endorsed Frota’s campaign and, in March of this year, invited him to become his Minister of Culture should he become president.

Bolsonaro also performed well above expectations, winning around 46.43 percent of the vote in Sunday’s presidential election, equivalent to around 49 million votes, meaning he fell just short of an outright majority. The election will now go to a second round between Bolsonaro and Socialist Party candidate Fernando Haddad later this month.