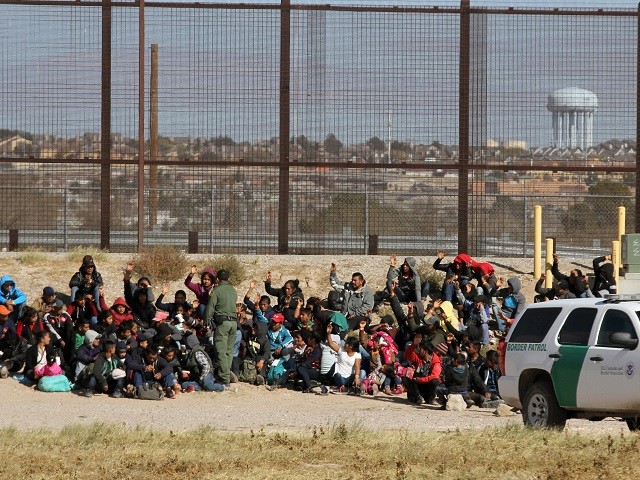 The House Democrats’ proposed 2019 homeland security budget reopens the nation’s southern border to migrant inflows, while it also dangles the promise of cheap labor in front of GOP legislators and donors.

The draft budget adds $1.75 billion in extra border spending to President Donald Trump’s $58.7 billion budget request for the Department of Homeland security in 2019, according to a copy published by the Washington Post.

But Democrats’ draft bill does not include any funding for the wall, and it uses the extra money to help migrants bypass border protections and then win jobs in the U.S. labor market.

Judging by the draft bill, “the Democrats want to limit the government’s ability to keep people out of the country,” said Mark Krikorian, director of the Center for Immigration Studies. In the Democrats’ provisions become law, he said, adding that “enforcement would be weakened and people abroad would every quickly learn of that, and then illegal immigration would dramatically increase, especially of people with children.”

Any flood of new migrants will force down wages for Americans, raise profits for donors, and will pressure some Americans to seek welfare from the government. In 2017, under rules set by former President Barack Obama and Congress, roughly 400,000 migrants got work permits to compete against Americans for jobs.

The Democrats’ bill does not include any money for fences or walls, and it bars officials from setting barriers in major migrant pathways across the border:

The bill blocks Trump’s rules which deny asylum to migrants who say they are afraid of gangs or domestic violence. It commits the DHS to end the detention of migrants who bring children to the border even though many migrants openly tell reporters that they bring children to trigger Obama’s catch and release rules. The bill also cuts funding needed to keep migrants in detention until their legal claims are resolved, and it spends at least $75 million to encourage the catch-and-release of migrants.

The bill allocates $502 million for “humanitarian concerns” to welcome and aid migrants as they push their way through the border.

It also reopens Obama’s pipeline for relaying Central American “UAC” youths from the cartels’ coyotes at the border up to their parents and relatives who are living illegally in the United States while cutting ICE personnel levels and enforcement operations.

The bill also reauthorizes the EB-5 law which allows wealthy Chinese and Indian families to effectively buy green cards if they lend cash to American real-estate developers. The citizenship-for-sale program has strong supporters in both parties, including from New York’s Democratic Sen. Chuck Schumer and Texas’ GOP Sen. John Cornyn.

The bill also diverts border security funds into pork-barrel spending in members’ districts, such as the purchases of aircraft, extra construction projects, $403 million for disaster spending, and a requirement that federal agencies clean up debris from forest fires.

The Democrats’ border-opening legislation comes after the GOP Hill leadership — and the White House’s Hill liaison team — failed last winter to enact a DHS funding bill for 2019. During the entire year of 2018,  the Senate’s GOP leadership did not publicly use any carrots or sticks to win Democratic acceptance to a border security plan acceptable to President Donald Trump, who must now pressure Hill legislators to pass much of the 2018 border security bill which was not passed in 2018.

But Democrats do not want to recognize the economic and civic damage from their tacit support of mass migration, said Krikorian. He continued:

It is becoming increasingly mainstream on the left to reject the concept of immigration controls. Not that criminals should be let in, or terrorists, but the principle [they support] that everyone has the right to move here — unless there is some specific reason to keep them out— is now at the center of the Democratic Party.

“Our elites are increasingly dangerous  — they are a danger to the health of their society,” he added.

Trump’s “Hire American” policy is pushing up wages. So the DC estb. is loudly negotiating itself towards a wage-cutting amnesty. Lots of Kabuki noise and jumping to ensure the media does not pay attention to the money. https://t.co/8vkEEOocfi

Democrats have plenty of tools to pressure GOP legislators to accept the Democrats’ border-opening legislation.

The bill denies any funding for walls. When GOP legislators push for wall funding, Democrats can demand offsetting cutbacks in enforcement and border rules.

For example, the bill does not include several expansions of visa-worker programs which were included in the July 2018 draft budget by Rep. Kevin Yoder and many GOP and Democratic appropriators. Yoder was defeated in November, but the border security panel is dominated by House and Senate appropriators.

Yoder’s provisions would have roughly doubled the inflow of H-2B seasonal laborers, so forcing down salaries for American seasonal workers and blue collar workers.

Yoder also pushed for a rule which would allow all farm companies — including dairies — to use the fast-growing H-2A agricultural worker program. If adopted, the measure would shrink farmers’ incentives and ability to buy American made, labor-saving machines, such as robotic cow-milkers.

Most dramatically, Yoder and his fellow appropriators offered the hugely valuable prize of green cards to at least 50,000 additional low-wage Indian and Chinese graduates per year if they take middle-class jobs from American graduates. The green card offer is being marketed by lobbyists as the fair removal of “country caps.” But it is being backed by U.S. Fortune 500 companies who wish to raise their stock values by hiring more cheap visa-workers in place of American graduates.

U.S. companies already employ roughly 1.5 million college trained visa workers, mostly in jobs that were not advertised to American graduates. Many of those workers accept very low wages from their employers in the hope of winning green cards from the government.

Feds use a fake university to bust college-grad labor traffickers who funneled at least 600 Indian grads into jobs around the US. The trafficking was hidden within the quasi-legal workforce of 1.5 million H-1B, OPT, L-1, TN, etc. white-collar visa-workers. https://t.co/EBenDh5wE3

Throughout the next several weeks, the GOP legislators will face pressure behind closed doors from business groups that want the cheap H-2A, H-2B, and H1B visa workers.

Yet few reporters ever ask legislators why they are eager to import cheap labor which forces down wages and salaries for Americans — including the wages and salaries paid to the journalists’ children, friends, relatives, and college roommates.

That flood of outside labor spikes profits and Wall Street values by cutting salaries for manual and skilled labor of blue-collar and white-collar employees.

Immigration also steers investment and wealth away from towns in Heartland states because coastal investors can more easily hire and supervise the large immigrant populations who prefer to live in coastal cities. In turn, that investment flow drives up real estate prices in New York, California, and elsewhere, pricing poor U.S. Latinos and blacks out of prosperous cities, such as Berkeley and Oakland.