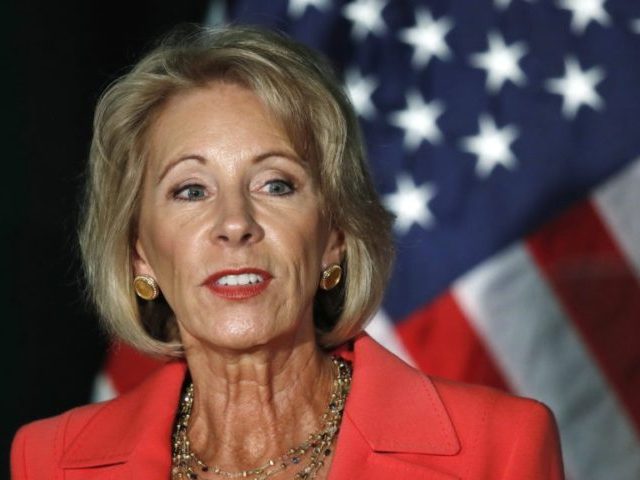 Education secretary Betsy DeVos “is not eager” to go along with other departments in the Trump administration regarding the possible establishment of a legal definition of sex that would ensure individuals’ identification as either male or female, says a new report.

DeVos may be at odds with the Department of Health and Human Services (HHS) when it comes to defining sex as either male or female under Title IX, which prohibits sex discrimination.

Transgender ideology, promoted during the Obama administration, however, demands the federal government enforce rules that help people easily switch their legal sex, regardless of biology.

In a piece Wednesday, the Washington Post suggested divisiveness within the Trump administration over a potential decision to dismiss gender ideology when it comes to identifying individuals.

“[T]he Education Department, which implements civil rights law regarding sex discrimination in the nation’s schools and colleges, is not eager to follow HHS’s lead, and the Justice Department is deferring to HHS, according to administration officials,” reported the Post.

The Health and Human Services Department has been pushing for the change, a fresh and direct aim at transgender rights, hoping other departments embrace that approach for sweeping impact. But it is unclear whether there is support for the broader effort or whether the regulation would be issued at all, as some in the administration are pushing back.

It’s unclear what the Education Department’s specific concerns are, but for many years, Secretary Betsy DeVos has privately supported lesbian, gay, bisexual and transgender rights and has been reluctant to dial back their protections.

According to the Post report, President Donald Trump said his administration is “looking at” the issue.

When asked about protecting LGBT individuals, the president said, “You know what I’m doing? I’m protecting everybody.”

The report comes in the wake of a story published at the New York Times Sunday that stated the newspaper had obtained a memo indicating HHS is “spearheading an effort to establish a legal definition of sex under Title IX.”

The department argued in its memo that key government agencies needed to adopt an explicit and uniform definition of gender as determined ‘on a biological basis that is clear, grounded in science, objective and administrable.” The agency’s proposed definition would define sex as either male or female, unchangeable, and determined by the genitals that a person is born with, according to a draft reviewed by [t]he Times. Any dispute about one’s sex would have to be clarified using genetic testing.

Supposedly, a proposed rule reflecting the definition would be presented to Attorney General Jeff Sessions by the end of the year.

That court found that the Obama administration regulation was overbroad and inconsistent with the text of the 1972 Title IX law prohibiting discrimination on the basis of sex. The court order remains in full force and effect today and HHS is bound by it as we continue to review the issue.

The statement followed a report in the Times that suggested the education secretary was at odds with Trump and Sessions over a change in former President Barack Obama’s transgender policy. The change would affect individuals’ ability to use whichever public bathrooms and other facilities they wish based on whichever gender identity they were adopting at any given time.

The question of how to address the “bathroom debate,” as it has become known, opened a rift inside the Trump administration, pitting the education secretary, Betsy DeVos, against Attorney General Jeff Sessions. Mr. Sessions, who had been expected to move quickly to roll back the civil rights expansions put in place under his Democratic predecessors, wanted to act decisively because of two pending court cases that could have upheld the protections and pushed the government into further litigation.

But Ms. DeVos initially resisted signing off and told Mr. Trump that she was uncomfortable because of the potential harm that rescinding the protections could cause transgender students, according to three Republicans with direct knowledge of the internal discussions.

“Everyone deserves to be treated with respect and HHS’s Office for Civil Rights will continue to vigorously enforce all laws as written and passed by Congress, prohibiting discrimination in healthcare on the basis of race, color, religion, national origin, sex, age, and disability,” Oakley said.

Addressing privacy and safety concerns, Heritage Foundation senior research fellow Ryan Anderson has urged Congress to clarify that “sex” does not mean “gender identity” with regard to interpretation of civil rights statutes.

“This would ensure that unelected bureaucrats and judges would not be allowed to reshape policy that affects women and girls,” he said in a statement.

Breitbart News reached out to the Education Department for comment but did not receive a reply.