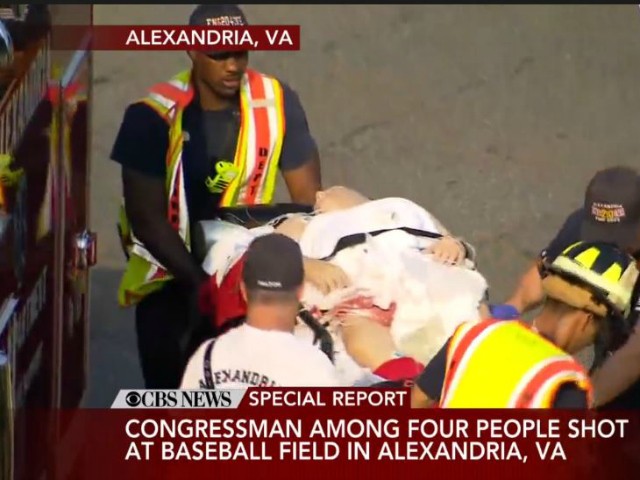 Sen. Rand Paul (R-KY) revealed a shocking detail the establishment media covered up about James Hodgkinson, the left-winger who attempted a mass murder at a Republican congressional baseball practice: according to Paul, the man who almost killed Rep. Steve Scalise (R-LA) and wounded four others was shouting, “This is for health care!”

During an appearance this week on Fox & Friends, Paul said:

I was there at the ballfield when Steven Scalise almost died from a very, very angry, violent man who was incited, really, by rhetoric on the left. And this hasn’t been reported enough: When he came on to the ball field with a semiautomatic weapon, firing probably close to 200 shots at us, shooting five people and almost killing Steve Scalise, he was yelling, “This is for health care!” He also had a list of conservative legislators–Republicans–in his pocket, that he was going to kill.

Paul was himself the victim of a brutal assault at his home late last year. Since then, people like NBC’s Kasie Hunt and other top Democrats have expressed personal delight over the savagery that left the senator with six broken ribs.

In an effort to reason with Democrats to tone down the left’s inciting rhetoric, Paul’s wife, Kelley, is speaking out. She told Breitbart News’s Amanda House that she lives in fear for her personal safety. She also penned an open letter to Sen. Cory Booker (D-NJ) asking him to retract his call for left-wing activists to get in the faces of Republican lawmakers. He has so far refused.

The calls for violence from a Democrat Party still frustrated over Donald Trump’s presidential win, his many successes at home and abroad, and, most especially, his two Supreme Court justices, have only escalated in recent days.

This week, two-time presidential loser Hillary Clinton said civility was not possible with Republicans, and former Attorney General Eric Holder said of the GOP, “When they go low, we kick them.”

Far-left cable channel CNN has also continued to legitimize violence and mob action in a number of dangerous ways. Just last month, Chris Cuomo defended the left-wing terrorist group Antifa, as did Don Lemon. On Tuesday, Lemon said mobs have a “constitutional right” to harass and intimidate GOP lawmakers out of restaurants.

As of this writing, Breitbart News has documented more than 590 separate acts of political violence, vandalism, mob action, and harassment against President Trump and his supporters at the hands of leftists.

Paul also told Fox & Friends, “There is going to be an assassination if this doesn’t ratchet down.”