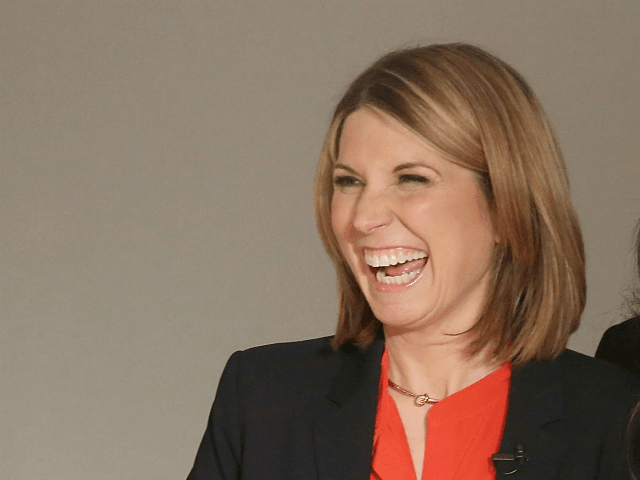 For the second time in less than six months, MSNBC afternoon anchor Nicolle Wallace has openly embraced violence against her Republican political enemies.

Referring to White House Press Secretary Sarah Sanders, back in May, Wallace asked a White House reporter on the air, “How do you resist the temptation to run up and wring her neck?”

This week, on her Thursday show, Wallace bragged about telling Jeb Bush to assault Donald Trump.

Referring back to the 2016 Republican presidential primary, Wallace proudly remembered, “I told Jeb Bush after the debate that I thought he should have punched [Trump]in the face.”

“Even if you lost, he insulted your wife,” she continued. “He came down the escalator and called Mexicans rapists and murderers[.]”

Wallace said Jeb asked her, “What do you think I should have done?” and she replied, “I think you should have punched him in the face and then gotten out of the race. You would have been a hero.”

What’s more, Wallace lied about Trump calling Mexicans rapists and murderers. He was referring to the bad guys the Mexican government sends over the border. Numerous studies back up this claim.

Wallace is only the latest member of the establishment media to encourage and romanticize violence against Republicans. Recently, her ideological colleagues at the far-left CNN have defended the left-wing terrorist group Antifa. On Tuesday, Don Lemon said left-wing mobs have a “constitutional right” to harass and intimidate Republicans lawmakers out of restaurants.

High profile Democrats are also encouraging violence. Two-time presidential loser Hillary Clinton said Democrats can no longer be “civil” with Republicans and former attorney general Eric Holder said the of the GOP, “When they go low, we kick them.”

As of this writing, Breitbart News has documented an epidemic of over 590 individual acts of violence, harassment, intimidation, and threats against Trump and his supporters — all of it committed by left-wingers.