Pope Francis met with Jesuit Father Jon Sobrino this week, the liberation theologian who had previously been censured by the Vatican for the theological “imprecisions and errors” in his writings, and thanked him for his “witness.”

According to an eyewitness to the meeting, Jesuit Father Javier Sánchez, the pope met Father Sobrino after an audience in the Vatican’s Paul VI Hall with some 6,000 Salvadoran pilgrims who had come to Rome for the canonization of the slain archbishop of San Salvador, Oscar Romero.

When the pope was passing by and was going to turn to the other side of the aisle, the Salvadoran Jesuit told him: “Holiness, Jon Sobrino is here.”

“And Francis’ face lit up, and he smiled broadly, walked over and gave the Jesuit theologian an effusive and affectionate embrace,” the priest said.

“I left you a copy of my latest book called Conversations. I suppose they will give it to you,” Father Sobrino said.

“Thank you for the book, Jon, but above all for your witness,” Francis replied.

“It seemed like a precious moment,” Father Sanchez said of the meeting. “I was particularly struck by the pope’s expression and how, when he heard Sobrino’s name, his face changed.”

The pope “seemed grateful for him being there and being able to greet him and thank him for his life, his books and his witness. A sort of full-fledged rehabilitation,” he said. 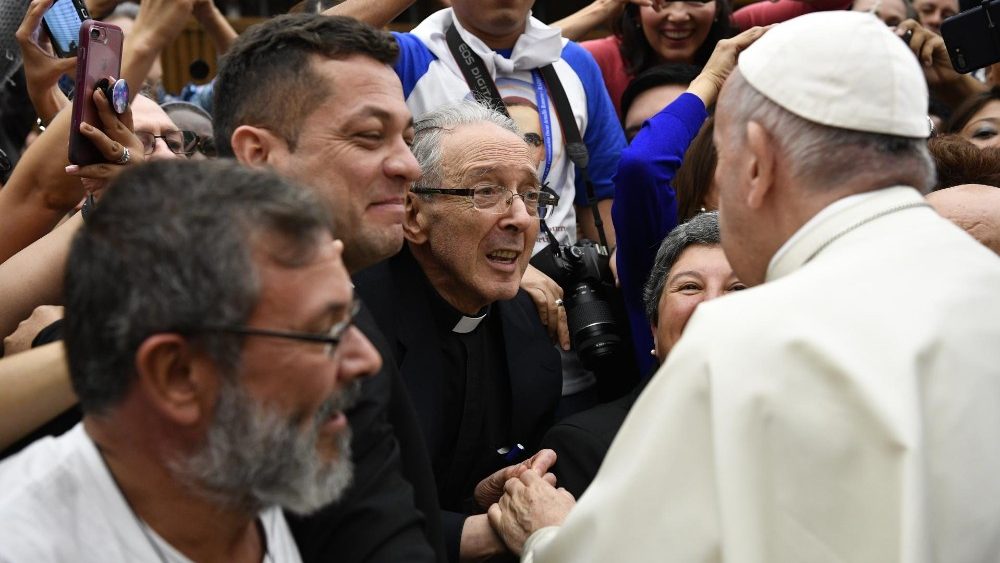 In 2006, the Vatican’s doctrinal congregation (CDF) issued a notification warning the faithful of problems with Father Sobrino’s theological opinions as expressed in two of his books that were widely used in Latin American seminaries. The Vatican’s concern over Sobrino’s works went back to 2001, the text noted, when then-Cardinal Ratzinger (the future Pope Benedict XVI) was prefect of the congregation.

In 2004, the Vatican had pointed out to Father Sobrino a series of “erroneous or dangerous propositions” contained in his texts and asked him to correct them for the good of the faithful. Only when Father Sobrino refused to correct his errors did the Vatican then issue a notification for the sake of Catholics who could be led astray by his works.

“Although the preoccupation of the Author for the plight of the poor is admirable, the Congregation for the Doctrine of the Faith has the obligation to indicate that the aforementioned works of Father Sobrino contain notable discrepancies with the faith of the Church,” the notification declared.

“The Congregation does not intend to judge the subjective intentions of the Author, but rather has the duty to call to attention to certain propositions which are not in conformity with the doctrine of the Church,” it said.

In its explanation of why it had issued the notification, the Vatican said that the mission of the Congregation for the Doctrine of the Faith is “the promotion and defense of doctrine on faith and morals for the whole of the Catholic world.”

“In this way, the Congregation seeks to be of service to the people of God, and particularly to the simple and poorest members of the Church,” it said.

In the seven-year period from 1998-2006, the CDF issued an unusual four disciplinary “notifications” against Jesuit priests for doctrinal errors or “ambiguities” in their writings.

As a group, the Jesuits have the distinction of being the most frequent recipients of Vatican doctrinal corrections of any order in the Church.

The Vatican’s doctrinal office is now headed up by a Jesuit for the first time in its history. In July 2017, Pope Francis named his fellow Jesuit, Father Luis Ladaria Ferrer, as prefect of the Congregation for the Doctrine of the Faith.

Pope Francis is the first Jesuit pope in the history of the Catholic Church.