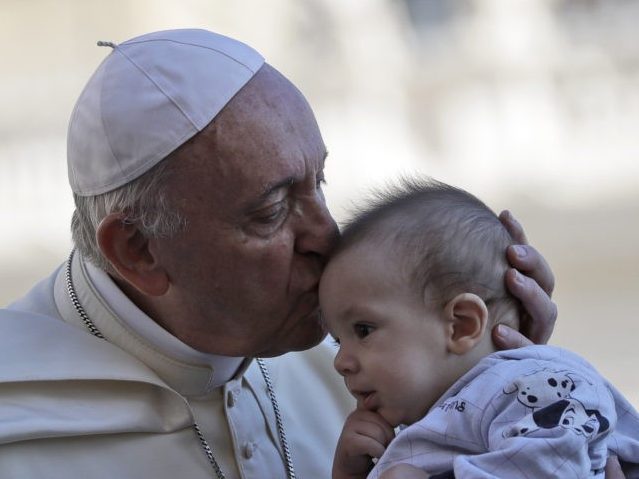 In commemoration of the 70th anniversary of the Universal Declaration of Human Rights (UDHR), Pope Francis condemned the ongoing violations of many rights, and first among them, that unborn babies are denied the right to life through abortion.

“When fundamental rights are violated,” the pope told participants in an international conference celebrating the UDHR, “or when they are favored by some to the detriment of others, or when they are guaranteed only to certain groups, then serious injustices occur, which in turn fuel conflicts with heavy consequences both within of individual nations and in relations among them.”

“Among other things, I am thinking of the unborn children who are denied the right to come into the world,” Francis said.

The Universal Declaration, which was proclaimed by the U.N. National Assembly on December 10, 1948, explicitly states in article 3: “Everyone has the right to life, liberty and security of person.”

In his message Monday, the pope appealed to world leaders as well as all men and women of good will to fight for the rights of their brothers and sisters, especially those who have no voice of their own.

Everyone is called to contribute courageously to respect for “the fundamental rights of every person, especially those who are ‘invisible,’ the many who are hungry and thirsty, who are naked, sick, foreign or detained, who live on the margins of society or are discarded,” he said.

“The Gospel itself invites us to turn our gaze to the least of our brothers and sisters, to move to compassion and to concretely commit ourselves to alleviate their suffering,” he said.

Among other violations of human rights, the pope mentioned exclusion from proper education, unjust deprivation from work or slave labor, detainment in inhuman conditions, torture, and forced disappearances.

Francis has often denounced the evil of abortion, calling it a “horrendous crime.”

In October, the pope compared going for an abortion to “hiring a hit man” to take out your child.

In a series of off-the-cuff reflections, the pope said abortion was like “bumping someone off” when they get in our way.

Often the killing of human life in the womb is defended “in the name of safeguarding other rights,” the pope said. “But how can an act that suppresses innocent and helpless life in its beginnings be therapeutic, civil, or even human?”

“It is like hiring a hitman to solve a problem,” he repeated.