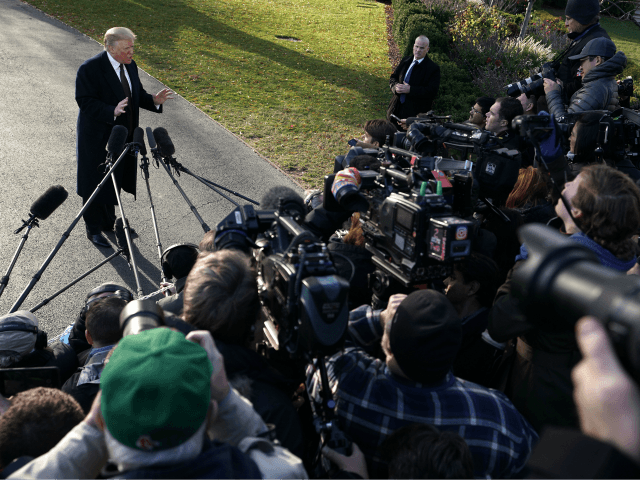 It would appear as though our horrible, no good, very bad and deliberately dishonest establishment media are at long last throwing in the towel and admitting they’ve been pushing fake news for over two years. Yes, in their own underhanded and cowardly way, they are finally admitting that these wild-eyed, evidence-free conspiracy theories about President Trump  colluding with Russians to steal the 2016 election after getting pee’d on, was all a lie.

What else are we to believe now that media are so desperate and pathetic they’re calling for Trump to be impeached over — no joke — sex.

Yes, the media have finally faced the fact that there is ZERO evidence of Russian collusion.

What’s more, there is even less evidence the president obstructed justice.

So now that these particular avenues of delivering a presidential coup have gone down in a rolling ball of flaming hot takes, the media will attempt to overturn a presidential election using sex, or, more precisely, a possible campaign finance violation.

Which once again proves hate makes you stupid.

Nevertheless, the media — the same media that circled the wagons to protect Bill Clinton for three decades, even after he committed perjury and adultery as president, even in the face of a credible rape allegation — want to impeach Trump for failing to report something he did with his own money while he was still a private citizen.

Let me point out a handful of stubborn facts:

But the media still believe Trump should be impeached because all of this perfectly legal behavior might have in some way violated a murky campaign law about reporting money you spend on your own campaign.

This, even after John Edwards was not convicted for using his presidential campaign to launder money from others to pay off a pregnant mistress.

Not only that, the media’s stupid gotcha play is based on the highly debatable legal premise that this payoff is only for the purposes of winning the election, when it is obvious these payoffs had plenty to do with matters outside the campaign, like Trump’s marriage, the good opinion of his children, his reputation, and career.

In other words, the central question of legality rests on, “Would Trump have made those payments anyways?” and we know the answer is yes.

You know all those stories the media love to tell about the extent to which Trump has, for decades, gone to protect his reputation from stuff exactly like this? Those stories actually prove this was not a campaign finance violation.

And even if it is ruled a campaign contribution, the Trump campaign only has to pay a fine, a fine that will that almost certainly be smaller than the record fine paid by the media’s precious Barry in 2013.

The good news is that the same media that spent three decades protecting sleazy Democrats like Bill and Hillary Clinton from actual lawbreaking, the same media that laughed off Obama’s abuse of power through the IRS and Department of Justice, are now so desperate, so lacking in Russia collusion, that they are forced to exposes themselves as desperately weak hypocrites by calling for Trump’s impeachment over something that is “just about sex” — a phrase familiar to anyone who lived through the media’s relentless defense of Clinton from impeachment.

Two years of fake news has just collapsed into the steaming pile of chickenshit it always was, and now the media actually believe they can turn that pile into chicken salad because a guy they hate used his own money for something that is perfectly legal.