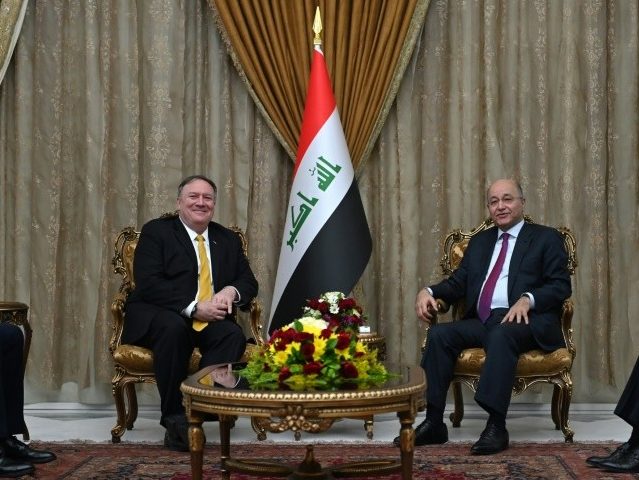 U.S. Secretary of State Mike Pompeo on Wednesday paid an unscheduled visit to Baghdad and the capital of the autonomous Iraqi Kurdistan region in northern Iraq as part of his Middle East tour of several nations that began in Jordan this week.

Great to meet the new Iraqi government and congratulate @AdilAbdAlMahdi, @BarhamSalih, @AlHalbooosii and @maalhakim in person and reinforce our bilateral ties. Look forward to working together on key regional issues and to supporting Iraq’s energy independence. pic.twitter.com/coF4r1yCJe

According to the U.S. Department of State (DOS), the tour is focused on sustaining support against Iran’s nefarious activities in the region, assuaging allies’ concerns over the White House’s plan to pull American troops from Syria, and ensuring continued support for the lasting defeat of the Islamic State (ISIS/ISIL).

During his meeting with the Iraqi PM, Pompeo “discussed the recent territorial defeat of ISIS in Syria and the continuation of our cooperation with Iraqi Security Forces to ensure ISIS’ lasting defeat throughout the region,” DOS revealed in a statement.

In a different statement, DOS added that the secretary of State also discussed the “the recent territorial defeat of ISIS and U.S. support for Iraqi Security Forces to ensure ISIS’ lasting defeat with the Iraqi president.”

Although the U.S.-led coalition and local forces have seized control of the territory once held by ISIS in Iraq, the jihadi group remains a threat, according to the Pentagon’s office of the inspector general (OIG) and independent assessments.

Referring to Pompeo’s meeting with the Iraqi speaker, DOS noted in a statement: “The Secretary emphasized U.S. support for the long-term bilateral partnership … Secretary Pompeo emphasized the U.S. commitment to addressing Iraq’s security challenges, including the continuation of our security partnership with Iraqi Security Forces.”

President Salih indicated “he would like to see the US help in the reconstruction of Iraq and rebuilding the country’s economy,” Rudaw reports, citing a statement from the Iraqi leader’s office.

Although DOS did not issue a statement about Pompeo’s trip to the Iraqi Kurdistan capital of Erbil, Kurdistan Regional Government (KRG) Nechirvan Barzani issued a brief statement via Twitter acknowledging the secretary’s visit, saying, “We had a productive meeting on further strengthening bilateral ties and discussed latest developments in the region.”

I’m pleased to welcome U.S. Secretary of State @SecPompeo to Erbil. We had a productive meeting on further strengthening bilateral ties and discussed latest developments in the region. pic.twitter.com/x10MEL5vK3

Besides the KRG prime minister, Pompeo also met with Kurdish leader Masoud Barzani, the head of the ruling Kurdistan Democratic Party (KDP), and the region’s Security Chancellor Mansour Barzani — believed to be next in line for the PM post, Rudaw reports.

KRG Deputy Prime Minister Qubad Talabani, who was also present during the discussions, indicated that Pompeo and the KRG PM “discussed the political and security developments in Kurdistan, Iraq, and the wider region,” the news outlet adds.

They “agreed that the situation is sensitive and that the internal issues have to be resolved through dialogue as well as reinforcing our relations with America,” Talabani’s office said in a statement, according to Rudaw.

The relationship between Baghdad and the KRG has improved in recent weeks following clashes over the Kurdish independence referendum in October 2017.

Baghdad and Kurdish leaders have reportedly ordered the removal of Iran-backed Shiite militias from Kirkuk and the return of the oil-rich city to the control of the KRG.

The Iraqi government used the Shiite militias to push the KRG out of Kirkuk in retaliation for holding a non-binding referendum on Kurdish sovereignty overwhelmingly approved by the Kurds in October 2017.

Baghdad legalized the umbrella organization of mainly Iran-backed Shiite militias in Iraq, known as the Popular Mobilization Forces/Units (PMF/U). The Pentagon OIG has deemed the PMF a threat to the American forces.

In Baghdad, “the secretary underlined the U.S. commitment to Iraq’s sovereignty and territorial integrity and U.S. support for the new Iraqi government’s efforts to deliver stability, security, and prosperity to all Iraqis,” DOS notes.

Pompeo’s trip came after U.S. President Donald Trump made a surprise holiday visit to troops in Iraq last month, stressing that the estimated 5,200 American service members would remain in the country despite plans to pull most United States forces out of neighboring Syria.

“Trump drew harsh criticism when he paid a three-hour surprise visit to US troops stationed in Iraq on December 26,” Rudaw points out. “The US president was criticized for not meeting with any Iraqi officials and accused of flouting the nation’s sovereignty. Pompeo’s visit could be interpreted as an effort to make amends.”

On Tuesday, the secretary began his Middle East tour, described as the top diplomat’s most extended trip since taking office last year, in Jordan.

Between January 8 and 15, Pompeo will visit Jordan, Egypt, Bahrain, the United Arab Emirates (UAE), Qatar, Saudi Arabia, Oman, and Kuwait to urge America’s allies in the Middle East to ramp up their efforts against Iran’s malign influence in the region, among other things DOS announced.