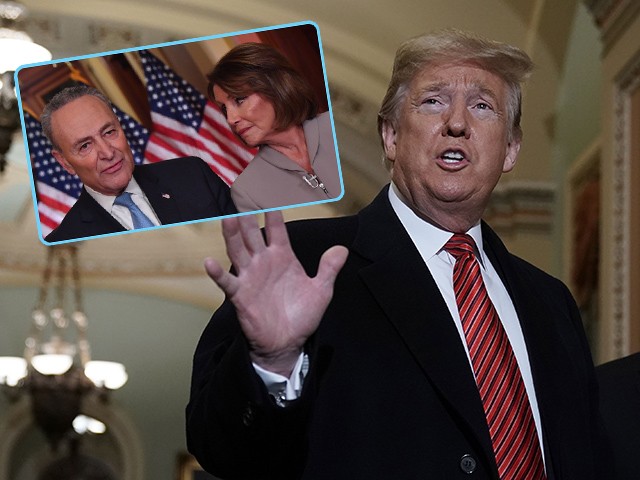 President Donald Trump walked out of a White House meeting with Senate Minority Leader Chuck Schumer and House Speaker Nancy Pelosi after they made it clear they were not willing to negotiate with Republicans to reopen the government and fund construction of a border wall.

“Just left a meeting with Chuck and Nancy, a total waste of time,” Trump wrote on Twitter.

Trump asked Nancy Pelosi if she would bring up a vote for border security within 30 days if he signed a bill to reopen the government.

According to Trump, Pelosi said, “No.”

“I said bye-bye, nothing else works!” Trump wrote.

Congressional Republicans confirmed the account after the meeting, noting that Schumer and Pelosi refused to commit to any funding for a wall within 30 days, even if the government was reopened.

Just left a meeting with Chuck and Nancy, a total waste of time. I asked what is going to happen in 30 days if I quickly open things up, are you going to approve Border Security which includes a Wall or Steel Barrier? Nancy said, NO. I said bye-bye, nothing else works!

Schumer said that Trump was being “cruel” and “callous” for insisting on the wall.

.@SpeakerPelosi following meeting with President Trump: “It’s cold out here and the temperature wasn’t much warmer in the Situation Room.”@SenSchumer: “The president just got up and walked out.” pic.twitter.com/0px8qTlva1