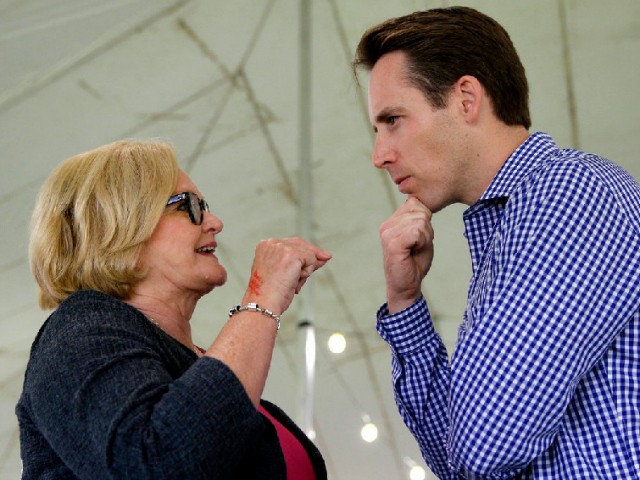 Attorney General Josh Hawley, the GOP nominee for U.S. Senate in Missouri, has a lead outside the margin of error over Democrat incumbent Sen. Claire McCaskill (D-MO) in the latest survey of Missouri voters.

A poll from the Trafalgar Group, a GOP firm, released on Sunday evening shows Hawley at 44.8 percent while McCaskill is down at 39.7 percent. The survey of 1,791 likely voters was conducted from October 29 to November 4 and has a margin of error of 2.3 percent–meaning that Hawley’s 5.1 percent lead over McCaskill is outside that margin.

Most other recent surveys, like a newly released Emerson poll, have Hawley in the lead as well:

Since the beginning of October, per Real Clear Politics, McCaskill has only led in one poll–an NBC News/Marist poll released on Monday.

President Donald Trump rallied with Hawley in Missouri on Thursday and will travel back to the state again on Monday night for his final rally of the midterm election with Hawley. Special guests Rush Limbaugh and Sean Hannity will join Trump and Hawley at the Missouri rally on Monday evening.

McCaskill is one of the hardest left-wing Democrats in the U.S. Senate and has worked against President Trump’s agenda at every turn. First and foremost, she opposed his two Supreme Court Justice nominees’ confirmations–both Neil Gorsuch and Brett Kavanaugh. Secondly, she opposed the tax cuts bill that President Trump backed. She also voted for amnesty for illegal aliens via the “Gang of Eight” bill in 2013.

Trump has hammered her on Twitter for consistently voting against his agenda:

No matter what she says, Senator Claire McCaskill will always vote against us and the Great State of Missouri! Vote for Josh Hawley – he will be a great Senator!

While McCaskill struggles through to the finish, Hawley has been on a “Stop Schumer, Fire Claire” bus tour barnstorming the state of Missouri in the final hours:

Honored to be with the man who will soon be MO’s senior senator, ⁦@RoyBluntMO⁩, this morning in Columbia. The 72 Hour Surge has begun. Awesome to be with this team of volunteers this morning! #MOSen pic.twitter.com/FaFvLPK4e0

At Cowan’s restaurant in downtown Washington, MO. Always awesome to be in Franklin Co. #mosen pic.twitter.com/E1sUhT3EUv

NRA President Ollie North joined him on the trail, too:

Honored to have ⁦@NRA⁩ President Ollie North on the trail with me today! #MOSen pic.twitter.com/pm1EzUmvFP

Powerful message from @NRA President Ollie North today. Liberals want to seize control of Congress, impeach @realDonaldTrump, and take away our rights. We have to stop them #MoSen pic.twitter.com/pTXDgnRyC1

It remains to be seen what will happen in Missouri, but President Trump’s decision to make this state his final campaign stop of the midterm elections is significant, as it signals how close this race really is–and how solid of a candidate Hawley has become.