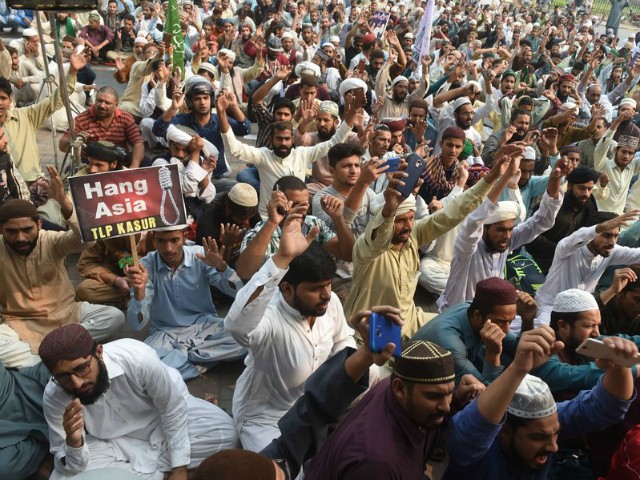 Pakistan’s Supreme Court on Wednesday overturned the death sentence handed to Christian mother Asia Bibi in 2010, calling the accusations of blasphemy against her “nothing short of concoction incarnate” and accusing the complainants of “insulting” Islam by fabricating charges.

In 2009, police arrested Bibi, a 47-year-old Roman Catholic mother of five, after two of her co-workers in a fruit field accused her of insulting Mohammed. The accusation followed a dispute in which the two women insulted Bibi for taking a drink of water out of what they proclaimed to be a “Muslim cup” and never presented evidence that Bibi said anything about Islam or Mohammed.

Bibi has consistently denied the charges. She has spent the past eight years in solitary confinement.

Blasphemy against Islam is a proscribed crime in multiple Pakistani statutes. Insulting Mohammed specifically is a crime carrying the death penalty in Pakistan. Bibi was sentenced to hang in 2010.

Agence France-Presse (AFP) notes that the Supreme Court explained its decision to acquit Bibi, granting her immediate release, in a 56-page ruling and sharply worded concurring opinion. The official ruling, penned by Chief Justice Saqib Nisar, argued that “tolerance is the basic principle of Islam” and condemned the women who originally accused Bibi of insulting the religion by leveling false charges.

“If our religion of Islam comes down heavily upon commission of blasphemy, then Islam is also very tough against those who level false allegations of a crime,” the chief justice wrote.

He went on to insist that “it is not for the individuals, or a gathering (mob), to decide as to whether any act falling within the purview of Section 295-C [the Mohammed blasphemy law],” a warning against any mobs seeking to kill Bibi following her freedom. While the Pakistani state has never executed a convict on charges of blasphemy, mob killings of Christians accused of various crimes against Islam are not uncommon.

The court reached its decision to release Bibi three weeks ago but held off on announcing it because Islamist groups had organized large protests against the court for simply accepting Bibi’s appeal before they had decided on it either way.

Justice Asif Khosa, who wrote the concurring opinion in the case, similarly accused the complainants of offending Islam.

Justice Khosa, in his note, said:

Blasphemy is a serious offence but the insult of the appellant’s religion and religious sensibilities by the complainant party and then mixing truth with falsehood in the name of the Holy Prophet Muhammad (Peace Be Upon Him) was also not short of being blasphemous.

Citing William Shakespeare, Justice Khosa described Bibi as “more sinned against than sinning” and the accusations against her “concoction incarnate.”

Members of Tehreek-e-Labbaik (TLP), an increasingly popular Islamist political party, have already threatened not just to kill Bibi following her release, but the three Supreme Court judges responsible for the ruling. While Bibi and her family have survived her imprisonment, Islamists have killed others in her name, most prominently the former governor of Punjab, Salman Taseer. Taseer’s bodyguard was shot to death in broad daylight in the capital, Islamabad, in 2016 after expressing support for Bibi. Islamists celebrated his bodyguard, Mumtaz Qadri, as a hero.

AFP spoke briefly to Bibi after the publication of the Supreme Court decision.

“I can’t believe what I am hearing, will I go out now? Will they let me out, really?” she asked. “I just don’t know what to say, I am very happy, I can’t believe it.”

Ashiq Masih, Bibi’s husband, told the outlet he and his children were “very happy” and “grateful to God.”

“My wife spent so many years in jail and we hope that we will soon be together in a peaceful place,” he said.

Masih had been clear in remarks early this month, following the news the Supreme Court would hear her appeal, that Bibi was not interested in converting to Islam despite pressure from violent groups, calling her “spiritually strong.” Similarly, Christian groups in Pakistan expressed fear upon hearing of the Supreme Court’s decision that Islamists would target unrelated Christian groups for attacks as a way to protest Bibi.

Islamists reacted to the news that the Supreme Court would hear an appeal this month by organizing thousands-strong rallies calling for her death.

Bibi’s release follows a period of intense international pressure on Pakistan to respect its Christian minority. In January, the United States Department of State placed the country on its Special Watch List for severe religious freedom violations, citing, among other infractions, Bibi’s imprisonment. The Pentagon also cut military aid to the country that month arguing that the Pakistani government did not sufficiently curb its Islamist elements, while President Donald Trump announced cutting American taxpayers’ dollars going to aid the country for the same reason.

“The case of Asia Bibi illustrates the extent to which blasphemy laws can be exploited to target minority communities,” USCIRF chair Tenzin Dorjee said, adding:

These laws seek to protect entire religions rather than the individual, as should be the case under international human rights standards. It is deeply troubling that Bibi’s case even reached this level, where she almost became the first person in Pakistan’s history to be executed for the crime of blasphemy.

The British Pakistani Christian Association (BPCA), which has advocated for Bibi’s release for years, also published a statement noting that Christians in the country “have been warned with alerts to be careful due to the high risk of revenge attacks.”

Wilson Chowdhry, chairman of the BPCA, praised God for her release in a statement.

“Asia Bibi has endured almost tent year [sic] of brutal incarceration in isolation. The world has watched her suffer but today thanks to the grace of God today the world rejoices,” he said. “Her freedom can hardly be called justice and nothing will ever compensate her for her lost years.”

“For now we can only pray that she is given the counselling and support she needs to recover and restore her place in society – this will of course be in a nation far away from Pakistan where it is untenable for her to remain,” he added.