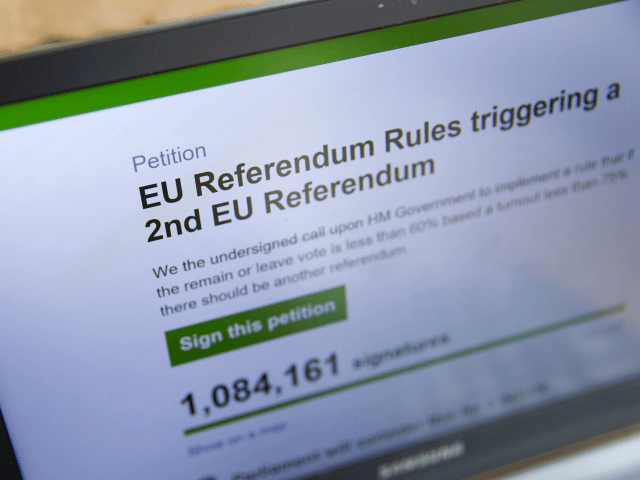 More than 100,000 people have signed an online Government petition to demand the Brexit referendum is not rerun and “ensure democracy rules.”

Breaching the 100,000 threshold does not automatically mean a debate will take place in Parliament, but it does mean the Government will respond in nine days and consider triggering a debate.

The petition was set up towards the end of October when hundreds of thousands joined a “People’s Vote march” in London calling for the 2016 referendum to be rerun and even overturned.

At 100,000 signatures, this petition will be considered for debate in Parliament (currently on 89k):Stop possible second referendum on E.U. membership https://t.co/LL7AbzxJZm #Brexit pic.twitter.com/zU7bTMjk0p

The petition, which at the time of writing has been signed by more than 101,500 people, states:

“Although not legally binding the referendum on whether we stay or leave the EU carried out on the 23rd June 2016 was the clearest indicator of the will of the electorate.

“At that time our Prime Minister David Cameron assured us that the result of the referendum would be carried out. We must ensure democracy rules.”

Mrs May, however, repeatedly promised not to call a general election in 2017 before doing so.

After the People’s Vote march last month, leading pollsters confirmed there is “no consistent evidence” that support is growing for such a vote.

He said: “I think a lot of people who voted Remain and don’t like the result want us to keep us voting until we give them the result they want. Democracy doesn’t work like that. You have to implement this decision and it had three votes behind it.”

He continued: “It had the general election in 2015 when the Conservatives promised a referendum.

“It had the referendum itself and the last general election, and both the Labour Party and the Conservative Party said they would deliver on the referendum results.

“So it already had popular support three times.”