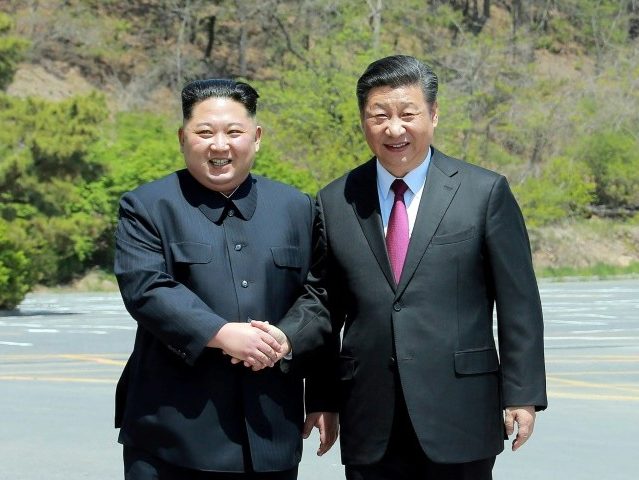 North Korea would clearly like a piece of the “Belt and Road” action and China desperately wants to loop them in, once sanctions against the North’s nuclear program have been lifted.

Regarding Daqing Oil Field, the newspaper said the city is playing a key role in international cooperation based on its superior natural resources and geographical advantages.

It also mentioned the completion of a second Sino-Russian oil pipeline.

In Harbin, the North’s newspaper outlined the details of a regular train service between the capital of Heilongjiang Province and Europe, saying the city is a strong point for rail links between inland Chinese regions and European countries.

In Hohhot, the North Korean paper focused on wind turbines built on an open meadow, noting that electricity is cheaper in the Inner Mongolia Autonomous Region than elsewhere due to its wind power generation.

Yonhap and the analysts it spoke to saw the Rodong Sinmun report as an effort to whet the appetite of North Koreans for cooperation with China’s regional projects and portray dictator Kim Jong-un as singing from the same “modern socialist” hymn book as the slightly less dictatorial leader of China, President Xi Jinping.

North Korea’s appetite for a more open economy might be seen as encouraging if Pyongyang and Beijing anticipate ending sanctions the right way through complete and timely denuclearization. It is a much less positive signal if North Korea assumes it can work with China and Russia to break the sanctions regime soon without full denuclearization.

After a period of turmoil in the China-North Korea relationship, which included such milestones as North Korea flirting with Russia as its new patron and Kim Jong-un suspecting the Chinese of plotting to assassinate him, Xi began meeting with Kim this year and (according to Chinese media) taking the younger North Korean despot under his wing.

Kim’s visits to China notably included inspections of organizations tied to the Belt and Road initiative. Transportation and agriculture upgrades were high on Kim’s shopping list in China. Chinese media congratulated Kim for paying serious attention during those inspections, unlike his father and predecessor Kim Jong-il, who made a few polite visits to Chinese facilities but stubbornly refused to implement the technology presented to him.

Kim’s interest in reviving North Korea’s economy by plugging into Belt and Road is clear. China, in turn, has two major reasons to bring Belt and Road through North Korea. One is the obvious necessity of passing through North Korea to reach the vastly richer and more strategically significant South Koreans. China has big dreams of either gaining more economic leverage over South Korea or wooing it away from its alliance with the United States and plugging it into China’s economic and political network. That will never happen unless North Korea starts acting a bit less North Korean.

The second, more urgent, and more straightforward objective for China is revitalizing the economy of Liaoning province along the North Korean border. Liaoning is basically China’s “Rust Belt.” It would benefit tremendously from a surge of trade with North Korea and the profitable exploitation of North Korea’s natural resources.

The road from Beijing to Pyongyang quite literally passes through Liaoning. Chinese investors have been flocking to the border city of Dandong, eager to put down bids on North Korean contracts and real estate as soon as sanctions are lifted. Property values on the Chinese side of the border are beginning to rise in anticipation. Special tax breaks and economic incentives have been put in place to transform Liaoning into the thriving gateway to post-sanctions North Korea.

The United States has been less enthusiastic about Belt and Road reaching into North Korea. In 2017, the presence of North Korean representatives at a major conference for the “New Silk Road” prompted a warning from the U.S. embassy to China against emboldening the renegade dictatorship in Pyongyang by promising riches that would undermine sanctions pressure.

The U.S. also warned China that other countries might be reluctant to sign up for Belt and Road if North Korea participated, especially since North Korea was threatening global stability with provocative missile launches at the time.

Asia Times speculated in September that South Korean President Moon Jae-in is eager to get to work on North Korean infrastructure projects, which would give a much-needed jolt to the somewhat sluggish South Korean economy and make a long-sought overland connection with Europe possible. The problem is that South Korea cannot possibly link its rail and highway network with Eurasia without plugging into Belt and Road. South Korean opposition politicians warn the plan might strengthen the North Korean regime and give Pyongyang and Beijing a great deal of economic leverage over Seoul while alienating the United States.