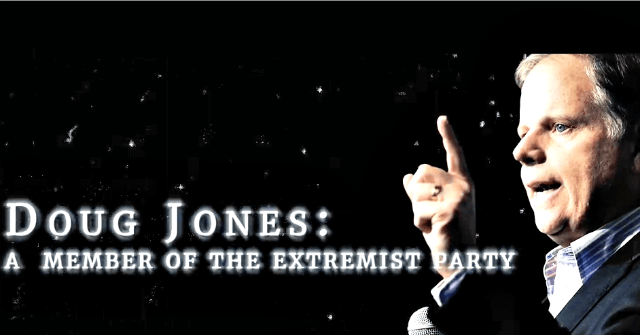 As the advertisement begins, images of former Presidents Franklin D. Roosevelt and John F. Kennedy appear on the screen alongside the phrase “once a party of the people” before flashing to a clip of Bernie Sanders (I-VT), which features the words “now a party of extremists.”

The ad, titled “Doug Jones: A Member Of The Extremist Party,” specifically focuses on five ideas the Democrat party has recently latched onto like Medicare for All, The Green New Deal, infanticide, raising taxes, and socialists.

The newly released ad also highlighted Sanders receiving applause for having “the most progressive platform in the history of the Democratic Party.”

The ad closes with an image of Jones with the words “Doug Jones: A Member Of The Extremist Party” splashed across the screen.