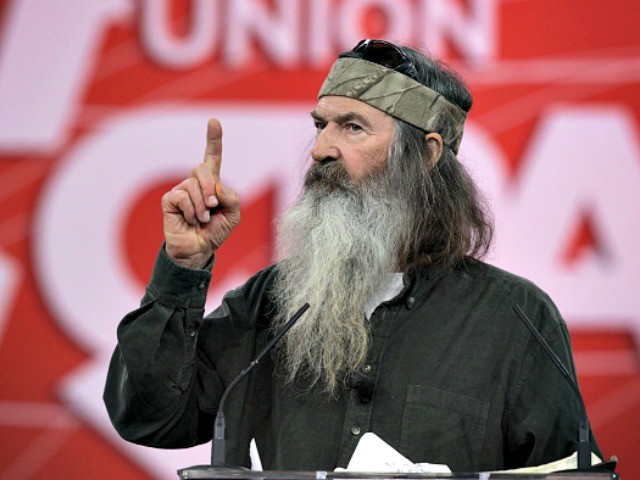 Duck Commander Phil Robertson expressed hope for Donald Trump remaining in office and Americans returning to faith while slamming the Democrat Party as run by “the Evil One” when he joined Breitbart News Daily radio on SiriusXM Patriot 125 Tuesday.

“If everybody just stepped back and looked at the Democratic Party and what they’re into, they are now into gross sexual immorality and perversion, they’re into murder, and they are into a continuing nonstop barrage of lies,” said Robertson. He said add those up, ”Well, Jesus said 2,000 years ago that the Evil One is the father of murder and lies…so that is who is running the Democratic Party, the Evil One.”

“I hope [President Donald] Trump stays in for another four years and there’s possibility of hope, but we’re in a mess my man,” Robertson told Breitbart News Daily host Alex Marlow who brought up America’s Founding Fathers. “God’s been warning us from Heaven this entire time, the Founding Fathers warned us when they were on the earth…and I’m warning them now along with you,” Robertson added.

Robertson and sons Al and Jase are launching a new podcast untitled “Unashamed.” He said the reason these two sons are joining him  is that among his four sons who know the Bible well, Al and Jase seem to stand out.

He said the podcast will cover the questions, “where did we come from, what are we doing here, and is there a way out of here.” He pointed to the Bible, Jesus Christ, doing what is right, loving God, and loving your neighbor.

“There is still hope for the country, but we must be very vigilant and turn it back to God, use the scriptures to teach our children,” said Robertson who spoke of the great need for faith during this period in history.

He then remarked that most people would call the Democrat Party “crazy,” but countered that to say, “what they actually really are, are very, very evil.” Robertson said “that’s what it’s all about” then pushed further, “they’re so evil, they seem like they’re mentally ill.”

“We’re trying to show America how we have to be with fathers and their children. We’re showing them that must be handed down from generation to generation or you lose that family structure which we have now lost in America,” said Robertson. “We’ve lost it because we didn’t- the parents, especially a father, didn’t hand that down to their children. A loving mother, a father who loves his children and their mother, it starts right there and you teach them via the scriptures and you rebuke them, you correct them, and you train them so that they can be righteous. They will do what is right.”

Robertson’s hope is that he and his sons will help the American family. “50 million of America’s families my man, do not have a father,” he said as evidence that the American family is in shambles. “I’m making a valiant effort, me and my sons, to try to get America to turn back and get a little common sense, a little godliness in them.”

He cited 1 Timothy 3:16 as indicative of the instruction listeners will see in the podcast. “What is the downside for a group of individuals…to loving God and loving each other,” Robertson said asking listeners to think about that.