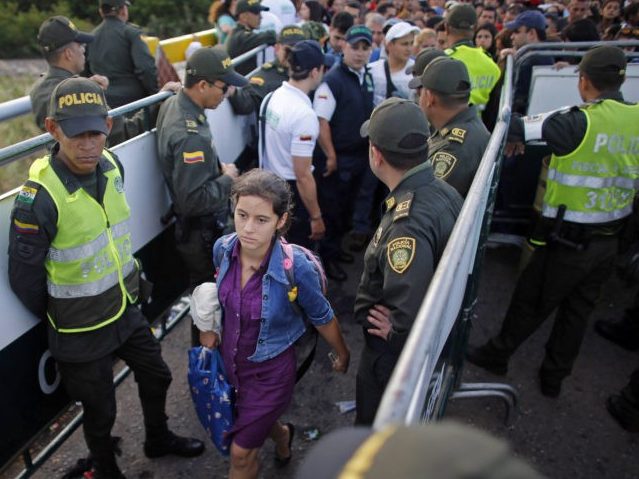 Venezuelan dictator Nicolás Maduro congratulated the heads of a government program known as “Salsa Heart” on Twitter Friday, attempting to move the spotlight away from his refusal to step down following his constitutional replacement by President Juan Guaidó and towards a tropical dance initiative meant to keep youth from protesting against socialism.

Salsa is a Caribbean music genre originating in Puerto Rico, Cuba, and New York City, but popular throughout Latin America and in the Caribbean particularly. Maduro launched the “Salsa Heart” initiative amid a wave of protests in 2017.

“I congratulate the ‘Salsa Heart’ movement for its two years of filling neighborhoods and communities in Venezuela with joy, to the beat of the clave and the bongos,” Maduro wrote on Twitter. “It is an achievement of the Revolution that shows the identity and cultural diversity of our beloved Fatherland.”

Venezuela’s state-run broadcaster VTV also ran a story on the “Salsa Heart” initiative on its website, explaining that the point of the initiative was to “grant opportunities to all national talent to bring Afro-Caribbean culture to every corner of the country.”

“Venezuela is salsa territory and Salsa Heart is a great cultural movement through music to spread our Afro-Caribbean culture that we have in the neighborhoods, that belongs to the neighborhoods, and we will reach the depths of the neighborhoods at a national level,” Javier Key, the socialist official in charge of the program, is quoted as telling VTV.

Maduro launched the initiative amid widespread protests in 2017 demanding an end to the socialist system that had left the country with minimal food and a totally depleted medicine supply. Maduro, who rose to power after the death of late dictator Hugo Chávez in 2013, spent much of his early tenure imprisoning, torturing, and killing protesters who demanded free and fair elections to replace Chávez. As hunger and illness escalated, Maduro turned to investing in distracting initiatives like the salsa program in an attempt to placate national anger, much of which is concentrated in universities and youth culture.

Three months before the “Salsa Heart” initiative launched, Maduro also debuted a radio show called “Salsa Time,” which featured the dictator playing and dancing to his favorite songs. Maduro claimed that the show was necessary to show “the soul of our people that the oligarchy will never understand.” The dictator spent much of 2017 broadcasting footage of himself dancing salsa and ordering the country to learn to dance, proclaiming on one occasion, “the youth of the Revolution must know how to sing, love, and dance to construct a peaceful and happy Revolution.”

At the time, food had become so scarce that 15 percent of Venezuelans were eating garbage to survive. Maduro placed full control of the food supply in the hands of the military, whose officials proceeded to demand bribes from civilians to access the food. Looting became a widespread alternative, so popular that police were arresting fellow officers for looting to survive.

The situation has since dramatically worsened. Under President Juan Guaidó, however, the government of Venezuela acknowledges the humanitarian disaster that Maduro has created; Guaidó’s first act as president was to request food and medicine for the Venezuelan people.

While Guaidó is the nation’s legitimate president, recognized by nearly 50 countries around the world, Maduro still inhabits the presidential palace and controls the military. This week, he ordered the military to blockade the road that connects Venezuela to Colombia to prevent American humanitarian aid from reaching the Venezuelan people. Maduro insisted in a speech that the aid is a trap intended to allow American soldiers to enter and invade the country.

“Nobody is going to enter Venezuela, not even a single invading soldier. We do not fear the threats of the American empire,” he said in a speech this week. “We tell Donald Trump as a people of peace that we do not fear him at all.”

On Friday, Maduro released an open letter to the American people contending that all the evidence of a humanitarian disaster in Venezuela readily available in international media is a lie.

“Your national representatives in Washington want to bring the same hate to your borders that they sowed in Vietnam. They want to invade and intervene in Venezuela – they say, as they have said before – in the name of democracy and freedom,” Maduro wrote. “The claim of usurpation of power in Venezuela is as false as that of weapons of mass destruction in Iraq.”

Venezuelans on the Colombian border appear to disagree. Those gravitating towards the aid, many hoping to acquire necessary medicine for survival that is no longer available in any part of Venezuela, have begun protesting the regime and demanding access to the aid sent by the United States. A group of young Venezuelans on the border demanded the aid enter on Thursday, carrying signs supporting Guaidó and referring to Maduro as a “murderer,” “usurper,” and “nefarious” ruler.