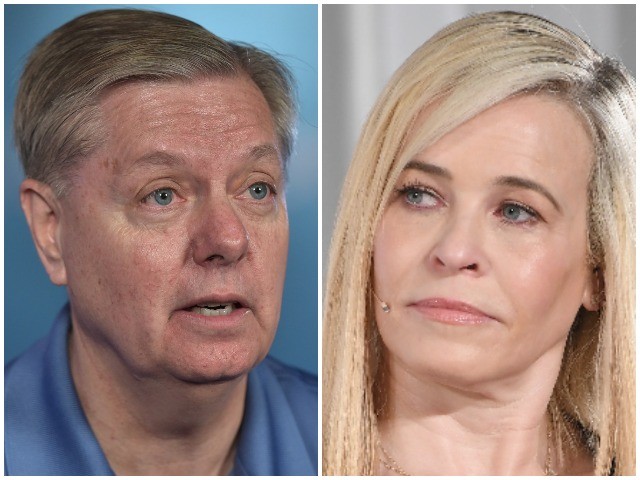 Sen. Lindsey Graham (R-SC) on Friday dismissed comedian Chelsea Handler’s continued gay-shaming of the Republican senator, agreeing that while homophobic jokes constitute the “lowest kind of bar” when it comes to humor, she is free to express whatever she pleases, no matter how vile it is.

In a brief interview with TMZ at Reagan National Airport, Graham was asked for his thoughts on a tweet Handler sent Thursday, in which she said Republicans likely “took a sick day today” because it was National Coming Out Day, an annual awareness day for LGBTQ members to celebrate coming out as gay. “Looking at you @LindseyGrahamSC,” Handler added, suggesting the senator planned to reveal he is gay to colleagues on the Hill.

If you’re wondering why Republicans took a sick day today, it’s probably because it’s #NationalComingOutDay. Looking at you @LindseyGrahamSC

“I don’t think about much about what she says at all,” Graham said of Handler’s tweet. “If she wants to live her life that way, it’s up to her.”

“A lot of people struggle with that issue, do you think she’s equating homosexuality with being evil?” the cameraman asked the lawmaker.

“She knows zero about me. To the extent that this matters, I’m not gay,” Graham replied. “These comments, they don’t reflect well on her. I don’t know how this makes us a better country. That’s up to her, not me.”

TMZ asked Graham if he thought making jokes about one’s sexuality was the “lowest kind of bar” in today’s culture. “Yeah, I just think we’re moving on from that,” Republican said as he made his way to his gate. Belittling people is not as fun as it used to be and that’s a good thing.”

Handler’s tweets come after some of Hollywood’s most vocal Trump critics hurled homophobic insults at Graham over his vociferous defense of Supreme Court Justice Brett Kavanaugh, whose confirmation was thrown into question after decades-old allegations of sexual misconduct were leveled against the judge.

Former television host Rosie O’Donnell lambasted Graham, referring to him as a “closeted idiot,” whose actions expose the “patriarchy” of gender relations in America.

Comedian and LGBT activist Kathy Griffin, infamous for posing with a mock, bloody head of President Donald Trump, tweeted: “Look at Miss Lindsey Graham trying to be all tough! What?Does Putin have a picture of Lindsay fucking a donkey?”

Look at Miss Lindsey Graham trying to be all tough! What?Does Putin have a picture of Lindsay fucking a donkey? #KanavaughHearings

Not to be outdone, late-night host Jimmy Kimmel compared the South Carolina senator to Liberace.

“And once he got some camera time – somebody must have told Lindsey Graham that Donald Trump was watching because he lit up like someone left a thumbtack on Liberace’s piano bench,” joked Kimmel.