A senior software engineer at Google with responsibility for a key feature of Google’s search engine labeled Tennessee Senate candidate Rep. Marsha Blackburn (R-TN) a “violent thug” and a “terrorist,” who Google shouldn’t “negotiate” with, according to internal emails obtained by Breitbart News. The employee also defended the censorship of her campaign ads on social media.

The comments took place in an internal email discussion that began on June 19 this year. The topic of discussion was Rep. Blackburn’s Fox News op-ed of the same month, which urged Silicon Valley companies to address bias against conservatives on their platforms. Blackburn, who has herself been the target of social media censorship, has been a vocal critic of tech giants like Google, Facebook, and Twitter during her time in Congress.

The op-ed was not well received within the corridors of Silicon Valley power. One Google employee, a site reliability engineer, called Blackburn’s piece “hilarious” and said Republicans are becoming “tribalists focused on stirring up outrage to maintain power.”

Blake Lemoine, a senior software engineer at Google, was harsher in his comments. Saying the public is being “lied to” by Blackburn, he went on to accuse the Tennessee representative of “causing the deaths of people she claimed to protect” — something he attributed to her work on the anti-trafficking bills FOSTA and SESTA.

“We certainly shouldn’t acquiesce to the theatrical demands of a legislator who makes political hay by intentionally reducing the safety of the people who she claims to protect,” said Lemoine. “I’m not big on negotiation with terrorists.”

When another Google employee objected to his use of the word “terrorist,” Lemoine responded that he’d be “willing to go with ‘thug’ as a compromise.”

“Would you be more okay with characterizing it as not being big on acceding to the demands of violent thugs?” asked Lemoine.

“This is a woman who passed a bill that killed people and is trying to use her passage of that bill to intimidate people. It’s clear to me that “do what I say or I’ll pass more bills like this one” is the implicit message.”

Lemoine is named in this story because he occupies a key position in the company’s influential search team, as a technical lead on Google’s search feed, formerly known as Google Now. The Google feed’s most distinctive feature is that it sends information to users proactively, using personal data to predict what information users want before they search for it. 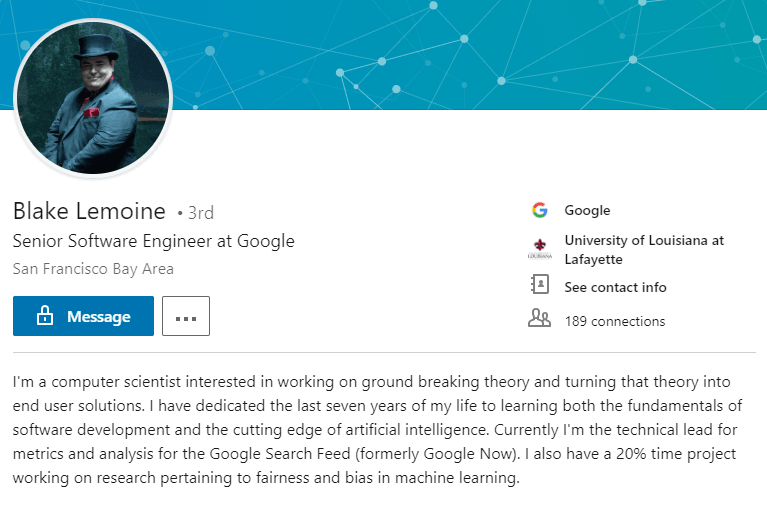 According to Lemoine’s LinkedIn, he also works on “research pertaining to fairness and bias in machine learning,” making his own biased comments particularly relevant.

Lemoine also indicated that he supports censorship on social media: he defended Twitter’s decision to temporarily censor one of Rep. Blackburn’s pro-life campaign ads on the platform, arguing that the takedown was not, in fact, censorship.

“Taking down libel is not censorship,” said Lemoine.

He went on to say “I think that believing that Twitter too it down because it was a lie is more reasonable than believing they took it down because she was a Republican. Especially considering how the legislation that she is touting in her article was sold through lies that she told.”

Although Lemoine caveated himself by stating “not all Republican ads are lies,” a question that Lemoine did not address is whether his own bias affects what he sees as “lies” — and whether that bias affects the decisions he makes in his role overseeing a key element of Google search.

We reached out to Google to clarify the extent of Lemoine’s responsibilities, and what safeguards the company has in place to ensure its employees’ often extreme political biases don’t filter into its products. Google has not responded at the time of writing.

Independent research acknowledged even by the anti-Trump Washington Post, found that Google search results tended to favor Hillary Clinton in the 2016 election. Research conducted prior to the 2016 election also found that if Google deliberately skewed its search results to favor particular candidates, it could shift the votes of undecided voters by margins of 20 percent or more. Lead researcher Dr. Robert Epstein also says that Google could potentially manipulate its search results without leaving a paper trail, as there is currently no system of monitoring or oversight to detect bias in the platform’s hyper-personalized search functions.

Beyond Google, other tech platforms are affecting elections in more transparent ways. Over the past two years, major figures in the conservative, populist, and pro-Trump movements have been banned from platforms like Twitter, Facebook, YouTube, and both the Google and Apple app markets, severely hampering their ability to digitally mobilize their supporters ahead of crucial midterm elections in November this year. Multiple conservatives have also been kicked off payment processing and crowdfunding platforms, crippling their ability to fundraise for campaigns and causes. Despite this, Democrats continue to call the tech censorship a “conspiracy theory.”

Rep. Marsha Blackburn is currently running in a tight two-way race against her Democratic opponent Phil Bredesen in Tennessee. Even minor bias on the part of tech companies could easily tilt the race against her opponent — unless her voters turn out in high enough numbers to nullify such bias. The threat from big tech notwithstanding, Blackburn continues to be a vocal critic of Silicon Valley’s failings, including political bias and failures to protect privacy. In June, Blackburn came out in favor of new regulation to protect consumers on social media platforms.