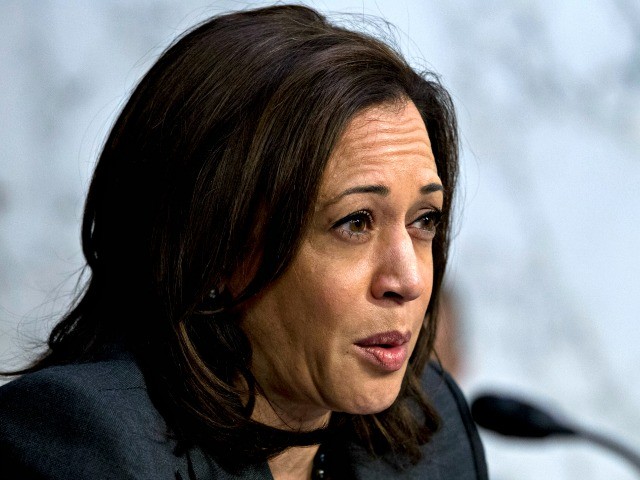 Sen. Kamala Harris (D-CA), 2020 presidential candidate, walked back her call for eliminating private health insurance and replacing it with a single-payer, government-run “Medicare for All” program less than 24 hours after she made her inflammatory remarks.

Harris inflamed controversy on Monday night during a CNN town hall in which she suggested that she would eliminate private health insurance for millions of Americans and replace it with a “Medicare for All” socialized medicine program.

“It is inhumane to make people go through a system where they cannot literally receive the benefit of what medical science can offer,” Harris said on Monday night. “Because some insurance company has decided it doesn’t meet their bottom line in terms of their profit motivation.”

Less than 24 hours later, a Harris adviser and Harris national press secretary Ian Sams said Harris remains willing to back health insurance proposals that would not eliminate private health insurance. The Harris adviser said the backlash from Republicans serves as “good trouble” for the California Democrat.

“Medicare-for-all is the plan that she believes will solve the problem and get all Americans covered. Period,” Sams told CNN. “She has co-sponsored other pieces of legislation that she sees as a path to getting us there, but this is the plan she is running on.”

“I don’t want to guess what [Harris is] thinking, but that is a massive part of the American economy. There is a system in place for funding it,” Durbin said. “It would take a mighty transition to move from where we are to that.”

Bloomberg rebuked the idea of Medicare for All on Tuesday, saying, “You could never afford that, you’re talking about trillions of dollars.”

Former Starbucks CEO Schultz said the idea of Medicare for All is “not American.”

Harris hopes to stand out in a crowded 2020 Democrat field; however, her proposal for Medicare for All arouses mixed feelings amongst the American populace.

A Kaiser Family Foundation survey found that 56 percent of Americans favor Medicare for All, but Americans’ favorability of the socialized medicine proposal drops to 37 percent when they hear that it would eliminate private health insurance.

Tricia Neuman, director of Kaiser’s program for Medicare policy, said, “Most people are satisfied with the health insurance until they have a problem. The public favors these proposals that would broaden choice, but also want to be sure they don’t lose something that they value.”

Progressives have noted in the past that Medicare for All serves as a popular slogan partly due to its “pleasant ambiguity,” meaning that it could encapsulate many proposals. This could explain why Sen. Harris has backed Medicare for All proposals ranging from Sen. Bernie Sanders’ (I-VT) plan to eliminate health insurance to Sen. Tim Kaine’s (D-VA) plan to offer a public option on the Obamacare exchanges.

Harris has backed multiple Medicare for All programs, including Sen. Sanders’ proposal which would eliminate private insurance, as well as Sen. Brian Schatz’s (D-HI) legislation which would create a “public option” allowing certain Americans to buy-in to Medicaid. The presidential hopeful also co-sponsored a plan from Sens. Jeff Merkley (D-OR) and Chris Murphy (D-CT) which would allow Americans to enroll in a form of Medicare and allow employers to purchase it for their employees. Harris also backed a bill crafted by Sen. Kaine that would create a public insurance option for the Obamacare exchanges as well as keep private health insurance options on the exchanges.

As Harris continues to move through the contentious 2020 Democrat battlefield, she might keep her options open to some form of Medicare for All.

Adam Green, a co-founder of the leftist Progressive Change Campaign Committee (PCCC), said that Medicare for All’s ambiguity serves as one of its greatest strengths.

“There is a pleasant ambiguity and more of a north star goal nature around Medicare-for-all,” Green contended. “This really does not need to be a huge intra-party battle. Why get in the weeds during the campaign?”