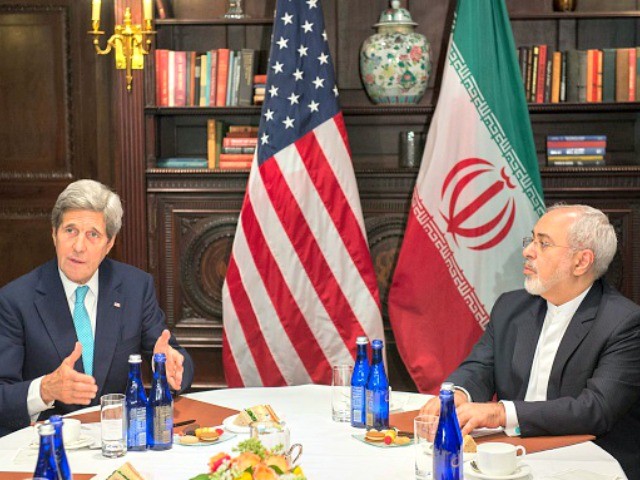 Former Secretary of State, senator, and 2004 presidential candidate John Kerry revealed on Wednesday that he has been secretly meeting with Iranian Foreign Minister Mohammad Javad Zarif to undermine the Trump administration’s foreign policy.

A wide variety of observers have denounced Kerry’s conduct as shameful, treacherous, and quite possibly illegal, although the laws in question are among the most inconsistently enforced laws on the books.

In the course of promoting his new book, Kerry revealed he met with Zarif “three or four times” to discuss the Iran nuclear deal, which President Donald Trump withdrew the United States from in May.

Kerry dodged questions about whether he explicitly sabotaged U.S. foreign policy by advising the Iranians to hang tough against the Trump administration’s sanctions and wait for a Democrat successor to rescue them, insisting that “everybody in the world is talking about waiting out President Trump.”

These activities bring Kerry to the shadowy borders of the Logan Act, the oft-cited but never-enforced 18th-century law that forbids private citizens of the United States from conducting diplomacy on its behalf or acting to thwart U.S. foreign policy. The Logan Act reads as follows:

This section shall not abridge the right of a citizen to apply, himself or his agent, to any foreign government or the agents thereof for redress of any injury which he may have sustained from such government or any of its agents or subjects.

Kerry, of course, knows that no one has actually been prosecuted under the Logan Act, but he also had enough sense to come up just short of flatly admitting he violated it by claiming that “everybody in the world” is talking about doing what he ostensibly told his Iranian friend to do. Kerry wants to posture as a hero of the global anti-Trump #Resistance, but he’s been in politics for too long to tempt fate by blatantly admitting he committed a crime, even if it’s a crime almost everyone else in the past 220 years has been given a pass on.

Republicans are keenly sensitive to the hypocrisy of the situation because one person recently has been hassled over the Logan Act: President Trump’s first national security adviser, General Mike Flynn. The outgoing Obama administration “invoked” the Logan Act to investigate Flynn for meeting with Russian Ambassador Sergey Kislyak before the transition to the Trump administration. Flynn was not actually prosecuted under the Act, but it became a widespread article of faith among left-wingers that he was a Logan-scoffing criminal.

Fox News analyst Walid Phares noted the media conjured the specter of Logan by playing up Flynn’s meeting with Kislyak as a “scandal,” but seems entirely comfortable with Kerry conducting “parallel diplomacy” with “a regime on the U.S. terror list.”

Senator Tom Cotton (R-AR) was on the same page Wednesday:

Kidding re Logan Act, a stupid, dead-letter law. Not kidding re hypocrisy. https://t.co/4Y41Mck6RO

Former White House press secretary Ari Fleischer contended that Kerry’s actions are “wrong” even if they are not illegal.

“John Kerry is out giving advice to Iran about how to maneuver around what Donald Trump is doing. It’s insidious,” he said.

Fleischer put his finger on the inherent flaw in the Logan Act: it is very difficult to establish with legal precision whether conversations between private citizens and foreign officials constitute treachery against U.S. government policy. Kerry insists it is perfectly normal for former secretaries of state to attend conferences around the world and meet with foreign leaders, although quite a few observers from well outside Republican political spaces have noted Kerry’s efforts in the Middle East and Europe to keep the Iran nuclear deal alive are highly unusual.

“This is the question: What was John Kerry doing? What was he saying, what were the specifics? I don’t think it was general. I think he was giving Iran advice about how to wait out President Trump,” Fleischer said. Thinking that and proving it are two different propositions, and if the rusty machinery of the Logan Act was finally fired up after two centuries for a prosecution, a high standard of proof would be required.

A Trump administration official pointed out to Fox News that Kerry’s meetings with Iran are particularly “shameful” given what the Iranians have been doing with the money Kerry and President Barack Obama gave them, pumping weapons to proxy fighters in the bloody civil wars and unrest of Syria, Yemen, and Iraq.

President Trump has questioned the legality of Kerry’s actions before, but on Thursday he had a different law than the Logan Act in mind:

John Kerry had illegal meetings with the very hostile Iranian Regime, which can only serve to undercut our great work to the detriment of the American people. He told them to wait out the Trump Administration! Was he registered under the Foreign Agents Registration Act? BAD!

The Justice Department explains the Foreign Agents Registration Act (FARA) of 1938 “requires persons acting as agents of foreign principals in a political or quasi-political capacity to make periodic public disclosure of their relationship with the foreign principal, as well as activities, receipts, and disbursements in support of those activities.”

In other words, Trump is accusing Kerry of acting as a lobbyist for the government of Iran without filing the required reports on his status and activities.

FARA is another one of those wobbly legal barriers that elite members of the political class can push through with determined effort. It suddenly became a much bigger issue last year after Special Counsel Robert Mueller indicted former Trump campaign manager Paul Manafort and his partner Rick Gates for violating it. NBC News reported in January that FARA filings soared after the Mueller indictments made foreign lobbyists nervous.

Writing at the Washington Examiner on Thursday, Michael Rubin argued that Kerry cannot have it both ways – if he is not violating the Logan Act, he is most likely violating FARA:

There has been a temptation among polemicists on both the Right and Left to criminalize the policy debate, and this is unfortunate. But that does not mean anyone should get a free pass for what appears to be criminal activity. If Kerry wants to criticize Trump for walking away from the JCPOA, he is free to do so. And if he wants to plot and plan with Zarif, he can register as a foreign agent on behalf of Iran. But he should not remain above the law. To allow him to do so sets a horrible precedent for any future administration, for American democracy, and for the coherence of U.S. policy. It is time both Kerry and the Justice Department understood that.

Assistant Secretary of State for Economic Affairs Manisha Singh chastised Kerry in softer terms at a meeting of the House Foreign Affairs Committee on Thursday.

“It’s unfortunate if people from a past administration would try to compromise the progress we’re trying to make in this administration. I don’t have personal knowledge of those meetings, but if that is happening again, I would find it very inappropriate,” she said.

The Logan Act is probably in more trouble than John Kerry since these treachery controversies always end with a chorus of demands for Congress to erase a law that no one is ever prosecuted for breaking. As it stands now, Logan is nothing but a political cudgel, something for online partisans to yell at each other about.