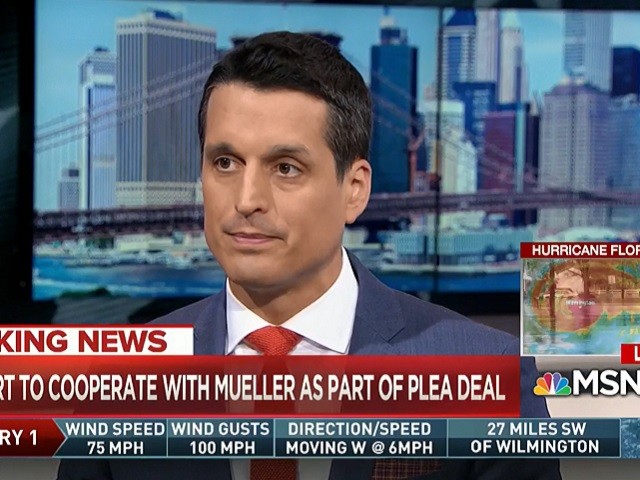 On Friday’s “MSNBC Live,” MSNBC Legal Analyst Danny Cevallos stated that he takes issue with the assumption that the information Paul Manafort has to offer Special Counsel Robert Mueller “must relate to Russia.”

Cevallos said, “[T]o get to cooperation, he had to convince Mueller and his team, through a proffer, that he still had valuable information to offer. The question is whether or not that information is related to Trump or related to Russia. And I take issue with the assumption that it must relate to Russia. Mueller is investigating things that may arise from his investigation of Russia, and we’ve seen he has the authority to do that. And when you look at those pictures that you put up a few minutes ago, George Papadopoulos, not connected to Russia in his plea. He pleaded guilty to lying. Michael Flynn pleaded guilty to lying. … Alex Van Der Zwaan, pleaded guilty to lying. Now, of course, when you talk about, is it related to Russia? Yeah, I realize there are two Russian flags in the bottom right corner of the screen. So, the indictments are related somewhat to Russia. But when I look at that screen there, I see one, two, three, four, five faces that arguably had very little, if anything at all, to do with Russia.”

He added, “[T]here isn’t a direct relationship, at least as to the individual defendants and their pleas, to Russia, when you look at the overall picture, yes, this could further Mueller’s investigation. And in fact, it almost surely does further his investigation of Russia.” Cevallos further raised the possibility that Manafort could have information about the Trump Tower meeting and cautioned that information Manafort has could relate to Trump, but it doesn’t necessarily relate to the president.