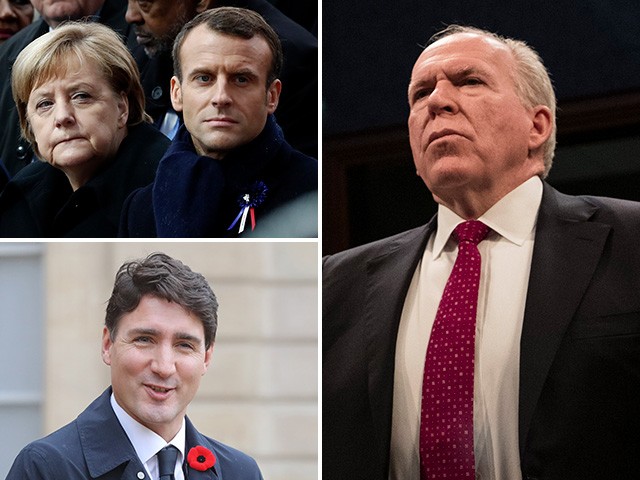 Former CIA chief John Brennan on Monday lauded Canadian prime minister Justin Trudeau, French president Emmanuel Macron, and German Chancellor Angela Merkel for their contributions to “global peace” and said he longs for a time when the U.S. presidency is “respected” once more.

“Trudeau, Macron, Merkel… it is so refreshing to see principled leaders saying & doing the right things… for their countries as well as for global peace & stability,” he wrote. “I miss the days when American Presidents, while never perfect, were respected for their honesty & integrity.” The remark following the 100th Armistice anniversary celebration attended by President Trump, Trudeau, Merkel, and host Macron.

Trudeau, Macron, Merkel…it is so refreshing to see principled leaders saying & doing the right things…for their countries as well as for global peace & stability. I miss the days when American Presidents, while never perfect, were respected for their honesty & integrity. https://t.co/6ylCDH8ETP

Khashoggi, a Washington Post opinion writer, went missing October 2 after entering the Saudi Arabian consulate in Istanbul. On October 24, the Kingdom’s public prosecutor admitted the journalist was murdered and vowed to hold the culprits accountable. The whereabouts of Khashoggi’s body are still unknown.

Brennan, a frequent critic of President Trump, has increased his criticism of the administration after the White House removed his security clearance in August. The move came amid concerns Brennan and other former intelligence officials have been improperly using their access to sensitive information for personal profit.

“I have a unique constitutional responsibility to protect the nation’s classified information, including by controlling access to it. Today, in fulfilling that responsibility, I have decided to revoke the security clearance of John Brennan, former director of the Central Intelligence Agency,” President Trump said of pulling Brennan’s security clearance. “Mr. Brennan’s lying and recent conduct characterized by increasingly frenzied commentary is wholly inconsistent with access to the nation’s most closely held secrets.”

Last month, Brennan was among several prominent figures, including former President Barack Obama and progressive billionaire George Soros, to have an apparent crude pipe bomb mailed to them. During a talk at the University of Texas at Austin, Brennan blamed the incident on President Trump, accusing him of stoking “anger” and “violence” around the country. “His rhetoric too frequently fuels incidents that are now bleeding over into acts of violence,” he said. “It’s clear that this rhetoric is counterproductive. It is un-American.”