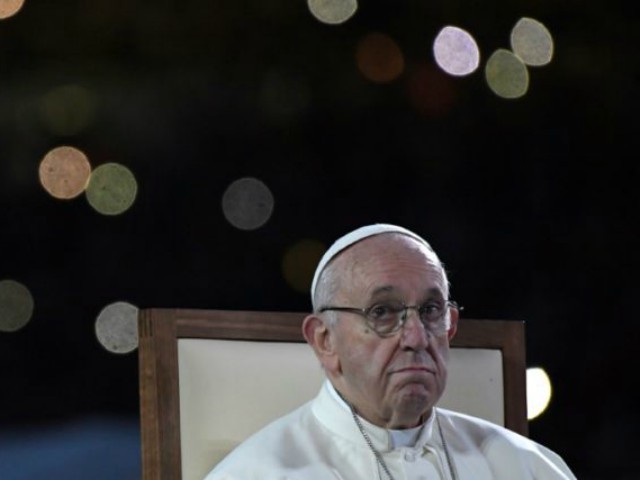 Jesuit Father Joseph Fessio, Editor-in-Chief of Ignatius Press, said this week that Pope Francis needs to “be a man” and answer allegations that he seriously mishandled the case of serial homosexual abuser Cardinal Theodore McCarrick.

The former papal nuncio to the United States, Archbishop Carlo Maria Viganò, released a report last month declaring that the pope was aware of McCarrick’s misdeeds at least as early as 2013 and yet lifted sanctions against McCarrick that Pope Benedict had imposed and reinstated him to a position of prominence in the Vatican.

When a journalist asked the pope whether these allegations were true, however, the pope refused to confirm or deny the report, saying he had no comment to offer.

Since then, the pope has attempted to turn the tables on Archbishop Viganò, suggesting that those who level accusations against bishops are in league with Satan, while accused pastors who keep silence are like Jesus on the cross.

For some, this was the last straw.

“He’s attacking Vigano and everyone who is asking for answers,” Father Fessio told CNN.

“I just find that deplorable. Be a man. Stand up and answer the questions,” he said.

The Jesuit priest, a longtime personal friend of Joseph Ratzinger (Pope Emeritus Benedict XVI), has joined the swelling ranks of those calling on the pope to answer the allegations against him and open a formal investigation into McCarrick’s abuse and its cover-up.

More than 46,500 Catholic women have signed an open letter to Francis, calling on him to come clean regarding the McCarrick case.

Viganò’s testimony “accuses you, Holy Father, and highly placed cardinals of turning a blind eye to former Cardinal McCarrick’s egregious behavior, and promoting this predator as a global spokesman and spiritual leader. Is this true?” the women ask.

“We need leadership, truth and transparency,” the women wrote. “We, your flock, deserve your answers now.”

Since the Viganò report came out, a number of bishops have stepped forward to vouch for the archbishop’s integrity and have repeatedly called for an investigation into his allegations.

The president of the U.S. Conference of Catholic Bishops (USCCB), Cardinal Daniel DiNardo, requested that the Vatican order the inquiry, and traveled to Rome to make this request to the pope in person. He returned empty-handed.

Despite growing consternation over the pope’s silence and inaction, his closest aides and boosters have closed ranks around him.

The Rev. Antonio Spadaro, for instance, the editor of the Civiltà Cattolica journal and a personal friend of the pontiff, said the Viganò statement was “just evil,” adding that the pope himself “draws energy from the conflict.”