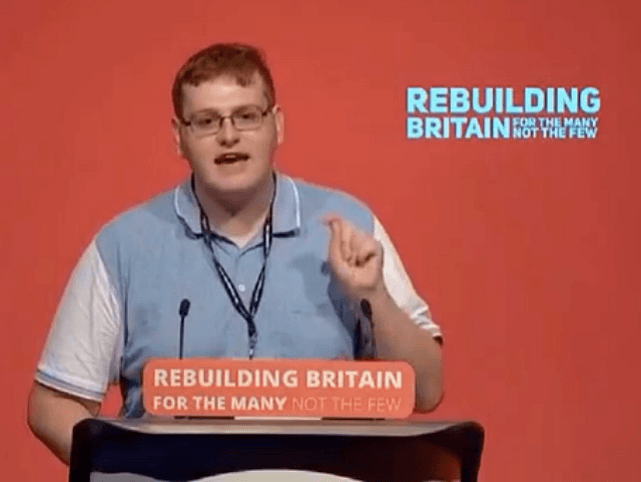 A young Corbynite has given an impassioned plea at Labour Party conference against a second referendum and for Brexit, among a background of bickering among senior party members over whether to oppose Brexit or not.

Young Labour member David Mallon, from Blyth Valley, in the north of England, condemned the debate surrounding a possible party-backed second referendum, arguing it would increase the feeling of marginalisation of voters in his constituency which voted 60 percent in favour of leaving the EU.

“I implore you, all come to Blyth Valley… and tell them why you want them to remain,” he told fellow delegates at the Arena and Convention Centre in Liverpool on Tuesday.

“For too long they have felt marginalised like they have not had their voices heard,” Mr Mallon said.

“I believe the European Union to be a capitalist club that is for the few, not the many,” the young socialist said, adapting Labour leader Jeremy Corbyn’s party slogan, ‘For the many, not the few’.

Making the Labour argument for Brexit and echoing points made by British left-wingers against membership of the EU’s forebear, the EEC (European Economic Community) in the 1970s and 1980s, Mr Mallon warned that the free movement of people was driving down British workers’ wages, saying:

“It uses free trade to take advantage of those who are [from] Eastern Europe — Poles, Romanians, who come over for a better life — and our wages are undercut because the bosses think [that] because of the European Union, they can pay them less.”

Mr Mallon’s pro-Brexit speech, which also took jabs at the Conservative Party’s negotiations with the EU and blamed former Prime Minister Margaret Thatcher for allowing “free trade” across the bloc, was well-received by the audience.

After leaving the stage, the young socialist met and was warmly greeted by Labour leader Jeremy Corbyn, who had in the past made leaving the EU a left-wing cause and had been an outspoken EU critic his whole political career, voting against EEC membership in 1975 — until he became leader of the Labour Party, where his position has remained unclear.

Corbyn has been dogged by accusations of anti-Semitism at a personal level and against his party for several months; the party conference has been overshadowed by the scandal with Corbyn denying on The Andrew Marr Show on Sunday that he was an anti-Semite.

In addition, the party has been thrown into disarray during the conference with conflicting messages from senior figures whether a party-backed ‘People’s Vote’ on the terms of the government’s exit agreement with the EU would include an option to Remain in the EU — effectively making it a second referendum in all but name.

Shadow chancellor John McDonnell said Monday that a proposed People’s Vote would not have an option on the ballot paper to Remain, saying to do so would not respect the result of the June 2016 referendum.

However, on Tuesday, shadow Brexit secretary Keir Starmer said that a “public vote” must be an option if there were not a General Election before the UK leaves the EU on March 29th, 2019, adding: “Nobody is ruling out Remain as an option.”

“Keir Starmer is another member of the Remainer elite who thinks he knows better than the people. I will remind Mr Starmer that 5 million Labour voters also voted for Brexit.

“Labour, Liberal or Tory, it’s clear that if people want Brexit then they will have to vote for UKIP at the next general election.”