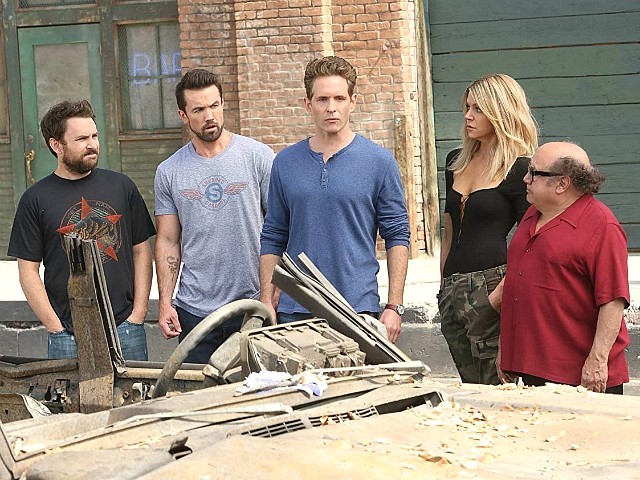 While Mobilize America, an online platform aimed at connecting volunteers with progressive political campaigns, did not reveal which cast members were present, reports say some members of the show’s zany lineup began canvassing in Simi Valley following a noon training session.

“Join cast members of It’s Always Sunny in Philadelphia and our grassroots supporters in Simi Valley to kick off our 12PM canvass on Saturday, November 3!” a blurb on Mobilize America reads. “We’ll start with a quick training before heading out into the community to knock on doors and spread the word about Katie and the November 6th general election.”

Actor Adam Scott also campaigned in support of Hill on Saturday, knocking on doors in Lancaster.

The Parks & Recreation star shared a photo of himself canvassing to social media, tweeting: “Saying insanely funny shit while canvassing for ⁦@KatieHill4CA⁩ with full-on bro ⁦@jeffullrich⁩ today in #CA25 Get out there! Lend a hand! #Vote !!!”

Saying insanely funny shit while canvassing for ⁦@KatieHill4CA⁩ with full-on bro ⁦@jeffullrich⁩ today in #CA25 Get out there! Lend a hand! #Vote !!! pic.twitter.com/bUrBXUQgFO

Following the ad’s release, the Congressional Leadership Fund said in a statement: “The ad contrasts Steve Knight’s work to cut middle-class taxes, resulting in $3,000 in savings for California families, with Katie Hill’s liberal agenda of higher taxes and increased gas prices. The ad will run on television in the Los Angeles media market and on digital platforms throughout the district.”

According to FiveThirtyEight, Hill has a 63 percent chance of beating incumbent Rep. Steve Knight (R-CA) in what the Los Angeles Times described in July as “one of the most fiercely competitive congressional races in the country.”