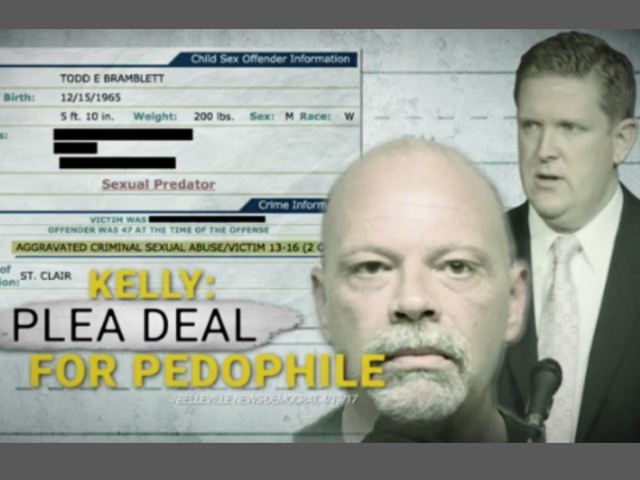 Democrat Brendan Kelly is running for Congress in Illinois’ 12th Congressional District, but now, only weeks before Election Day, his work as a state’s attorney is coming back to haunt him after opponents began hitting him for freeing a child sex abuser in a plea deal while he was in the prosecutor’s office.

Kelly is already well known for time and again making plea deals that allowed a variety of criminals to get off on lesser charges, but the latest deal he is taking heat for is his 2017 agreement with suspect Todd Bramblett, a man who was charged with three felonies over accusations that he sexually touched two young girls.

The plea deal with Bramblett was highlighted in new TV spot featuring Nick Gailius, the chief of police of Fairview Heights, Illinois. In the ad, Gailius says that police on the beat all knew that Kelly was soft on crime.

“On Kelly’s watch over 50 percent of the crimes in his jurisdiction were pled out,” retired police chief Nick Gailius says in the ad. “Kelly even cut a plea deal with a pedophile who sexually assaulted two 14-year-old girls allowing the predator to walk free.”

But in 2017, Kelly swept in and reached a deal with the offender to plead guilty to lesser offenses, allowing him to walk free with no jail time and only 42 months of probation.

Kelly also has been hit with allegations that his campaign chairman, St. Clair County Clerk Thomas Holbrook, sexually assaulted a man when both were much younger. Derek Wallace, 47, alleges that Holbrook sexually molested him back in the 1980s when Holbrook was going out with Wallace’s mother.

Kelly’s GOP opponent, Congressman Mike Bost, has thus far issued a firm “no comment” on the charges. Bost has represented Illinois in Congress since 2014.