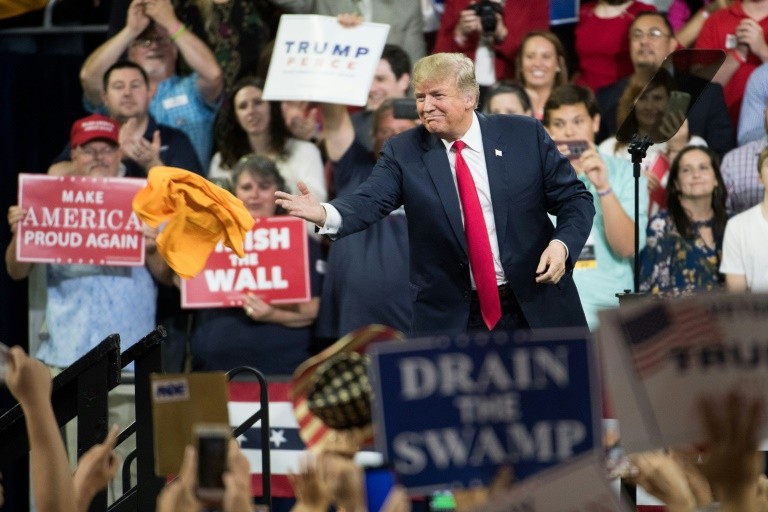 President Donald Trump will hold a campaign rally in Kentucky on Saturday evening as he barnstorms across the nation to help Republicans in key races.

Heading to the Great State of Kentucky – Big Rally for Congressman Andy Barr – Fantastic guy, need his vote for MAGA! Strong on Crime, Tax Cuts, Military, Vets & 2nd A. His opponent will NEVER vote for us, only for Pelosi. Andy has my Strongest Endorsement!!! See you in Kentucky.

Supporters do the wave at rally holding signs that read, “Women for Trump,” “Keep America Great,” “Drain the Swamp,” and “Build the Wall” to name a few. pic.twitter.com/HCYX1uEj71

Congressman Andy Barr takes the stage in Richmond: “Two years ago, the people of Madison County delivered a huge victory to Donald Trump,” he said. “When he talks about making America great again, he’s talking about you.”

Congressman Andy Barr has followed up onto the stage after an introduction by senator Rand Paul. @heraldleader @BGPolitics pic.twitter.com/2ykoEYB5RE

This is the BACK of the line to get into the Trump rally at EKU in Richmond with four and a half hours to showtime. Not seen: many other people. ^JC pic.twitter.com/qI3esUwz4s

This is the line to get into Alumni Coliseum at Eastern Kentucky University. pic.twitter.com/YKzGfkwcMb