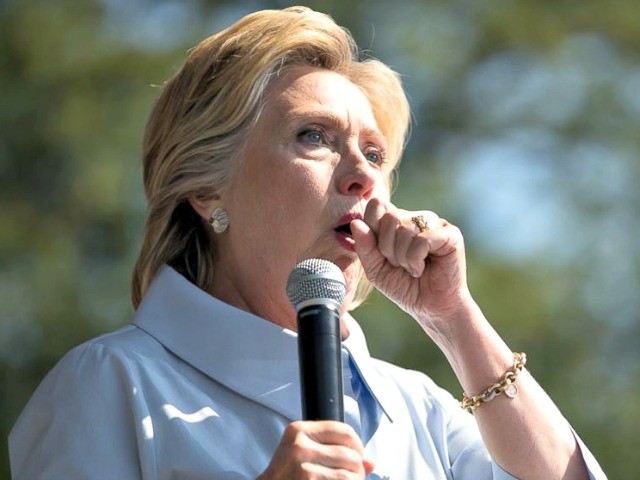 Former Secretary of State Hillary Clinton experienced a coughing spell while touring the University of Oxford ahead of an event honoring former first lady Eleanor Roosevelt.

Clinton delivered a speech before Mansfield College’s Bonavero Institute in commemoration of Roosevelt’s role in drafting the Universal Declaration of Human Rights and was awarded an honorary degree from the school. While on a tour of Mansfield College, Clinton was spotted repeatedly using her fist to cover her mouth as she coughed her way through a conversation with Helena Kennedy, the university’s former principal.

Here is Mrs Clinton, spluttering her way through Mansfield College and asking for a glass of water pic.twitter.com/i5SEXBQYKL

Further, the ceremony included the unveiling of a statue of Roosevelt, which was attended by the former first lady’s granddaughter Tracy Roosevelt.

And here is a first glimpse of the Eleanor Roosevelt statue, which is actually being unveiled later this evening pic.twitter.com/McoDaAZPZ3

Later Monday, Clinton participated in a discussion with Kennedy on the milestone document’s 70th anniversary.

A rapturous applause for @HillaryClinton at the @BonaveroIHR in Oxford, as she arrives for an event to mark 70 years of the Universal Declaration of Human Rights. pic.twitter.com/qSAVOnc2Qi

According to the Oxford Mail, Clinton is scheduled to deliver a speech on the “rise of illiberalism”

Clinton’s coughing fits were a staple of the former Democrat presidential nominee’s speeches during the 2016 campaign.