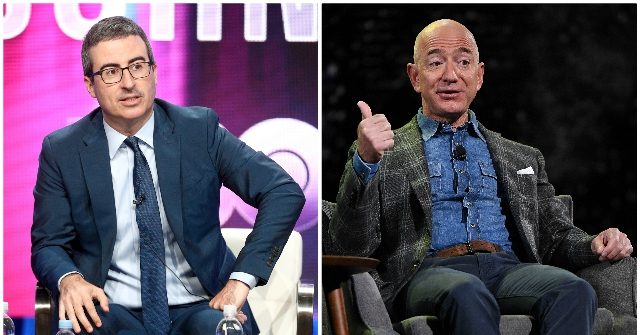 HBO host John Oliver has found himself in a war of words with e-commerce giant Amazon, after criticizing the company’s notoriously “brutal” warehouse conditions.

“The more you look at Amazon, the more you realize its convenience comes with a real cost,” Oliver said on Sunday’s edition of Last Week Tonight with John Oliver.

“Because, think about it, we used to have to drive to stores to buy things. Now those things are brought directly to us and they’re somehow cheaper,” he continued. “That didn’t just happen with a clever algorithm — it happened by creating a system that squeezes the people lowest on the ladder hard, and all the while the man behind Amazon is now worth $118 billion, more than anyone else in the world.”

Oliver then pointed to Amazon’s notorious working conditions, with reports of managers closely monitoring the duration of their employee’s bathroom breaks.

“When people shorten their time in the bathroom they don’t shorten the bathroom part, they shorten the handwashing part, so the next time you order something online it’s safe to assume that it’s been packed by urine-soaked hands,” Oliver quipped.

After watching the segment, the company’s senior vice president of operations,  Dave Clark, took to Twitter to argue that Oliver is “wrong on Amazon.”

“As a fan of the show, I enjoy watching John make an entertaining case for the failings of companies, governments and most recently – Mount Everest,” he wrote. “But he is wrong on Amazon. Industry-leading $15 minimum wage and comprehensive benefits are just one of many programs we offer.”

If they had they would have met the amazing people who work in our operations. People whose passion and commitment are what makes the Amazon customer experience special. I am proud of our team and to suggest they would work in an environment like the one portrayed is insulting.

We are proud of the safe, quality work environment in our facilities – so much so that we offer tours to the public, ages six and up. But unlike over 100,000 other people this year, John and his producers did not take us up on our invitation to tour one of our facilities.

If they had they would have met the amazing people who work in our operations. People whose passion and commitment are what makes the Amazon customer experience special. I am proud of our team and to suggest they would work in an environment like the one portrayed is insulting.

It is not the first time that Amazon has pushed back against criticism from public figures. Last month, the company responded to claims from far-left New York Congresswoman Alexandria Ocasio-Cortez that they pay their employees “starvation wages,” pointing to their $15 minimum wage and lobbying efforts to raise the national minimum wage. Ocasio-Cortez’s fervent opposition to the company has repeatedly been cited as the main reason why they pulled out of building a new headquarters in Queen’s, New York, that would have created an estimated 25,000 jobs.

.@AOC is just wrong. Amazon is a leader on pay at $15 min wage + full benefits from day one. We also lobby to raise federal min wage. https://t.co/crWp5fPEzS