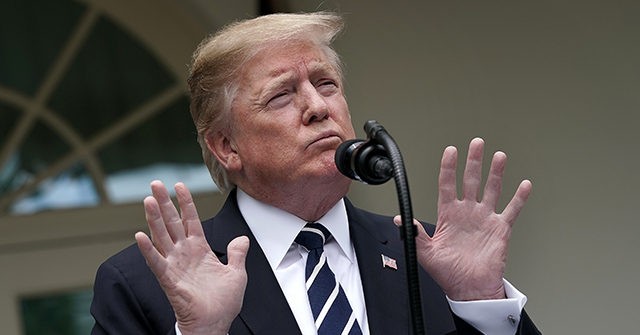 President Donald Trump applauded the departure of Rep. Justin Amash (I-MI) from the Republican Party on Thursday, dismissing the fiercely Never Trump congressman who has publicly called for the president’s impeachment.

“Great news for the Republican Party as one of the dumbest & most disloyal men in Congress is ‘quitting’ the Party,” Trump wrote on social media. “No Collusion, No Obstruction! Knew he couldn’t get the nomination to run again in the Great State of Michigan. Already being challenged for his seat. A total loser!”

Great news for the Republican Party as one of the dumbest & most disloyal men in Congress is “quitting” the Party. No Collusion, No Obstruction! Knew he couldn’t get the nomination to run again in the Great State of Michigan. Already being challenged for his seat. A total loser!

Amash announced his decision to quit the GOP on Thursday morning in an op-ed in the Washington Post.

“Today, I am declaring my independence and leaving the Republican Party,” he wrote. “No matter your circumstance, I’m asking you to join me in rejecting the partisan loyalties and rhetoric that divide and dehumanize us. I’m asking you to believe that we can do better than this two-party system… If we continue to take America for granted, we will lose it.”

Officially, Amash claimed he was compelled to leave the party because it no longer stood for the principles that “made the American Dream possible.”

“The Republican Party, I believed, stood for limited government, economic freedom and individual liberty — principles that had made the American Dream possible for my family,” Amash wrote. “In recent years, though, I’ve become disenchanted with party politics and frightened by what I see from it.”

“The two-party system has evolved into an existential threat to American principles and institutions,” he added.

The timing of the departure, however, comes one day after Breitbart News reported on a new poll showing the libertarian “gadfly” underwater in his own congressional district. According to the survey, Amash trailed his pro-Trump opponent, Michigan state Rep. Jim Lower, by double digits.

In May, Amash became the first Republican member of Congress to accuse Trump of engaging in “impeachable conduct.” Amash, who only practiced law for a short time before seeking public office, made the determination after reading the redacted version of former Special Counsel Robert Mueller report on Russia’s alleged interference in the 2016 presidential election.

To justify his calls for impeachment, Amash cited several debunked claims the Trump campaign engaged in collusion. His push for impeachment was widely condemned by fellow Republicans in Congress, including occasional allies within the House Freedom Caucus.

Amash’s departure from the GOP means there are no longer any Republicans in Congress supporting impeachment.