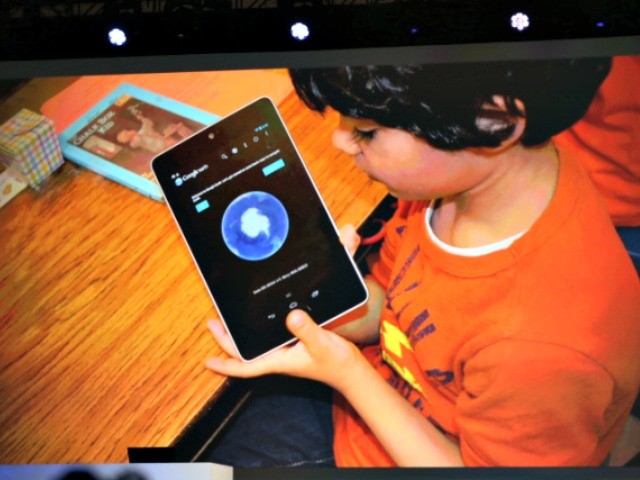 A video recorded by Google and sent to Breitbart News revealed the tech giant will continue to push its Chromebooks and other products into schools as they collect personal student data – all with the blessing of the federal education department.

In the video released Wednesday, Google CEO Sundar Pichai responded to an employee’s question about whether the company is willing to “invest in grassroots, hyper-local efforts to bring tools and services and understanding of Google products and knowledge” so that people can “make informed decisions that are best for themselves.”

Pichai replied that Google will ensure its “educational products” reach “segments of the population [they] are not [currently] fully reaching.”

Google – and others in the tech industry, such as Facebook, Apple, Microsoft, and Pearson – have partnered with the U.S. Department of Education and school districts throughout the country. Their aim is to collect private student data as they also cash in on the Common Core reform that was privately funded by Microsoft founder Bill Gates and championed by politicians from both parties laser-focused on workforce development – also a pet project of the U.S. Chamber of Commerce.

In fact, in June, the Trump administration proposed a merger of the federal education and labor departments – with a goal of workforce development.

In an interview with Breitbart News, Eunie Smith, president of the Eagle Forum, said the proposal is mind-boggling in its apparent acceptance that it is the role of the federal government to plan the workforce.

Smith said the proposal is a “Jeb Bush-type plan” that suggests “the only purpose of education is to prepare a citizen for a slot in the workforce.”

“Rather than equip an individual to pursue whatever goal he sets for himself as part of his God-given freedom, this is, instead, the German model being pushed by misguided business interests and some state interests,” she explained. “As a result, the type of education an individual would receive would be influenced by crony corporations dictating to schools the skills needed for future workers.”

The private data helping to plug students into different industries is being provided by tech giants like Google.

“It doesn’t take undercover investigative journalists to unmask the massive privacy invasion enabled by educational technology and federal mandates,” conservative author and CRTV host Michelle Malkin wrote at National Review in April. “The kiddie data heist is happening out in the open — with Washington politicians and bureaucrats as brazen co-conspirators.”

Appearing as a guest on SiriusXM’s Breitbart News Tonight Wednesday evening, Malkin added that Google has been “stuffing our kids’ minds and larding up their computers, which are donated by Google and all of these big tech companies into the classrooms with GAFE, which is Google Applications for Education.”

In April 2017, an investigation by Electronic Frontier Foundation (EFF) revealed student use of technology in school has grown at a profound rate, especially with free or low-fee devices issued by schools. The surge in ed tech has led the industry to be valued at over $8 billion.

Under the guise of “personalized learning,” school-issued computer devices — now distributed to at least one-third of K-12 students in schools across the United States — are serving to collect and store an unprecedented amount of personal data on children without their parents’ notice or consent. The U.S. Department of Education supports this:

Approximately half of the devices issued to U.S. children are Google Chromebooks, with about 30 million students, teachers, and school officials using Google’s G Suite for Education, observed EFF.

Student information collected by education technology services through these devices includes not only personally identifying information (PII) – such as name and date of birth – but also browsing history, location information, contact lists, and behavioral data.

Student data is also often automatically uploaded to the cloud – all without the knowledge of parents.

In a column at the Atlanta Journal-Constitution, American Principles Project senior fellow Jane Robbins, co-author of Deconstructing the Administrative State: The Fight for Liberty, noted the collection of social and emotional learning (SEL) data is promoted in the federal Every Student Succeeds Act (ESSA):

This trend is bolstered by the recent fed-ed bill, the Every Student Succeeds Act, which encourages schools to include such non-academic measures in their accountability ratings. It’s bad enough that the feds demand accountability – which should be to parents, not federal or state bureaucrats – but it’s even worse that they dictate how that accountability should look. So much for the bi-partisan propaganda that ESSA ended federal education mandates.

Pediatrician Dr. Karen Effrem, president of Education Liberty Watch and executive director of the Florida Stop Common Core Coalition,observed in a column at the National Pulse that organizations such as the National Association of State Boards of Education and the American School Counselors Association openly acknowledge that a primary purpose of the Common Core State Standards is “to mold and profile students’ attitudes, beliefs and behavior — through what’s called social emotional learning (SEL) or ‘21st Century Skills.’”

“The Every Student Succeeds Act requires other factors besides student achievement in their mandated accountability plan, which is a wide gateway for social emotional assessment and data collection,” Effrem told Breitbart News. “State (Common Core) Assessments and The National Assessment of Educational Progress (NAEP) – also known as The Nation’s Report Card – are already starting to include mindset and school climate questions either as surveys or as part of the tests themselves.”

In April, a coalition of leaders of more than 100 organizations — both nationally and in 31 states — urged Congress to rewrite the Family Educational Rights and Privacy Act (FERPA) and to recognize the government has no right to, or role in, children’s private data collection.

“Psychological data related to behavioral, mental health, or special education concerns should be gathered after informed consent and treated with the same care and confidentiality as medical data, with appropriate sharing with law enforcement as needed under current statutes,” she asserted.