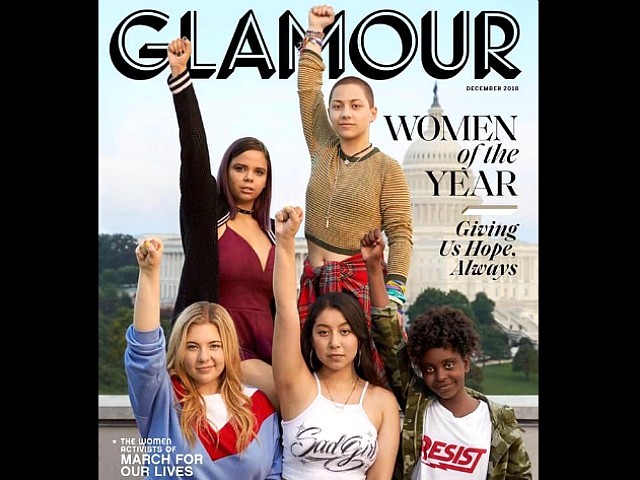 Glamour magazine is promoting five high school gun controllers as “Women of the Year” ahead of the November 6 midterm elections.

The women — Samantha Fuentes, Emma González, Naomi Wadler, Edna Chavez, and Jaclyn Corin — were all part of the March for Our Lives gun control movement and Glamour praised them for refusing to “take no for an answer.”

Women of the year. This is power. Thank you @glamourmag. pic.twitter.com/Ywi6ImeBJv

Glamour does not mention that the March for Our Lives movement pushed gun controls that wouldn’t have prevented, much less hindered, the February 14, 2018, Parkland high school attack. And some of the high schoolers, like Emma Gonzalez, vocally opposed certain measures that actually would have protected students.

For example, on October 9, 2018, Breitbart News reported that Gonzalez opposes allowing teachers to carry guns for defense of themselves and their students, even though unarmed teachers and 14 students who might otherwise have been protected were shot and killed at Parkland.

Gonzalez’s justifies arguments against armed teachers by claiming the push to arm them is really a push to “sell more guns.” This line of thinking aligns perfectly with the thinking of David Hogg, one of her male counterparts in March for Our Lives.

Following the horrid October 27, 2018, shooting at Pittsburgh’s Tree of Life Synagogue, Hogg claimed Trump’s calls for armed security in houses of worship is really an attempt to sell more guns. He said, “When they say ‘the only thing that can stop a bad guy with a gun is a good guy with a gun,’ what they’re trying to do is sell you two guns.”