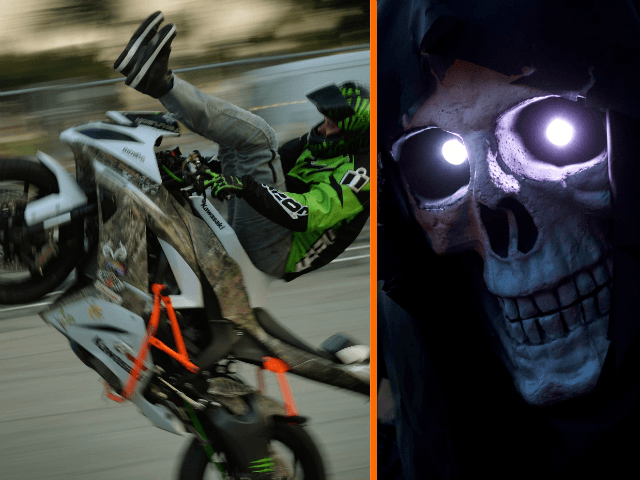 London Police have warned of dangerous motorbike and quad bike gangs setting off on huge Halloween “ride outs” to terrorise the capital’s population.

In recent years, massive convoys of scooters, bikes, and quads have taken to the streets on October 31st, mounting pavements, performing wheelies, and setting off fireworks.

The gangs “frighten and intimidate people and have caused considerable damage”, officers said.

Police said they have responded to the ride out events on Halloween, “where large numbers of motorcyclists have gathered in several locations across London” resulting in over 30 arrests last year.

“Their intent and action has been to cause disruption and anti-social behaviour, including driving recklessly, on the wrong side of the road, through red lights and across pavements; with many riders using stolen motorcycles,” the Metropolitan Police added.

In 2015, for example, a 200-strong gang of riders was organised on a “Hallowe’en Rideout” social media page and terrorised Purley, central Croydon, and Crystal Palace, the Croydon Advertiser reported.

Superintendent Louise Puddefoot said: “These groups have no consideration for other road users, and put themselves and members of the public at risk by driving recklessly in large numbers.

“They frighten and intimidate people and have caused considerable damage to local businesses.”

Spt Puddefoot warned people not be to join such groups, as it is not lawful, and people will be arrested.

She added: “We know that some people may see the event advertised and think they are joining like-minded enthusiasts on a lawful ride, within legal parameters.

“This is not the case. These groups are not in keeping with the law, they ignore the rules of the road and drive ruthlessly, carrying out stunts on the roads and pavements.

“Officers will be out across London throughout the Halloween period and will deploy a number of police tactics to prevent riders from driving dangerously.

“We intend to prevent disorder and crime caused by riders and we will be dealing robustly with offenders and making arrests where appropriate.”

Over the summer, London Police revealed they had dealt with an average of more than 430 crimes committed using mopeds per week over the past year.

Crime in the capital has been rising dramatically, with theft and violent attacks rising sharply and knife crime hitting record levels.